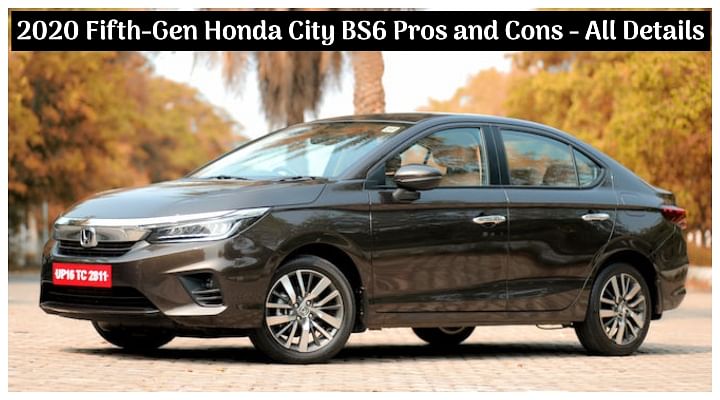 Honda Cars India has recently launched the all-new fifth-generation 2020 Honda City BS6 in the country. The Honda City has always been a special car for the Indians as well as for this Japanese carmaker. In fact, Honda entered the Indian market in the year 1998 with the City and it was an instant hit. The City has always been a benchmark in the mid-size sedan segment and currently, it rivals against the Maruti Suzuki Ciaz, Hyundai Verna, Skoda Rapid, Toyota Yaris and the Volkswagen Vento. Today, we will be listing for you the Top 5 Pros and Cons of the new 2020 Honda City BS6.

The Honda City has always been a handsome-looking sedan and the all-new fifth-generation model is no different. It has a very sophisticated appeal and looks extremely elegant. This new fifth-gen City sports some fresh design-cues from some other Honda sedans like the Civic and the Insight. It looks sleeker and more captivating than the fourth-gen model. At the front, it gets all-LED headlamps, LED DRLs and L-shaped turn indicators. The side profile of the car looks neat and it gets new 16-inch dual-tone machined-cut alloys. At the rear, it gets new Z-shaped 3D LED wraparound taillamps and overall, it looks very striking with a perfect blend of sportiness and elegance.

The new Honda City is a very feature-rich mid-size sedan. It gets an 8.0-inch touchscreen infotainment system which is compatible with both Android Auto as well as Apple CarPlay connectivity. It also gets the next-generation Honda Connect system with Telematics Control Unit (TCU). The new Honda Connect System offers 32 connected car features and also it is India's first connected car with Alexa remote capability. The new-gen City gets analogue clusters along with a 17.7 cms MID that shows a ton of information like real-time fuel efficiency, an innovative G-force meter, etc. Some other features include an electric sunroof, automatic climate control, remote engine start, auto-dimming inside rearview mirror, ambient lighting and many more.

In terms of space and practicality on offer, the Honda City has always been a benchmark in its segment and same is the story with this new model. The new fifth-gen Honda City is the longest and the widest sedan in its segment. It measures 4,549 mm in length, 1,748 mm in width and 1,489 mm in height. The wheelbase of the car stands at 2,600 mm and thus it is very spacious on the inside. The City has been always known for its back-seat comfort and this new fifth-gen City is extremely comfortable at the rear bench too. That's because it has more than enough space for the rear passengers and a roomy cabin with good ambience. It has a massive 506-litres boot space too.

As already mentioned above, the new Honda City gets a BS6-compliant 1.5-litre petrol engine mated to a 6-speed manual gearbox and a 7-step CVT. It also gets a BS6-compliant 1.5-litre diesel engine that comes mated to a 6-speed manual gearbox only. However, it does not get a diesel-automatic combo. Honda should have considered offering an automatic transmission with the diesel engine of the Honda City as its younger sibling Amaze gets a CVT mated to the same diesel engine, albeit in a lower state of tune.

No Adjustable Headrests on the Rear Bench

Honda City is a very comfortable sedan both for the chauffeur as well as the on-board passengers. The Honda City is well-known for its extremely good rear-seat comfort. It gets acres of space and the seats are also very comfy. However, there's a bummer. The new City doesn't get adjustable headrests for the rear-seat passengers. It isn't a major con but Honda should have offered it, at least on the top-spec variants, to make the best even better!

Now, it's not a major downside as the Honda City is loved by enthusiasts and they care about smiles per gallon and not miles per gallon. However, it is still worth mentioning that the ARAI-claimed mileage figures of the new City are slightly lower than its arch-rivals. The 1.5-litre petrol engine of the City mated to the 6-speed manual gearbox delivers 17.8 kmpl of mileage, the 1.5-litre petrol engine mated to the CVT delivers 18.4 kmpl and the 1.5-litre diesel engine mated to the 6-speed manual gearbox delivers 24.1 kmpl. All these are ARAI-claimed mileage figures and the actual results may vary.

Also Read: Royal Enfield To Launch 1 New Motorcycle In Every 3 Months; 28 New RE Bikes In The Pipeline - Details

So, these were the Top Five Pros and Cons of the new 2020 Honda City BS6. What are your thoughts on the all-new fifth-generation City and what are its pros and cons according to you? Do share your opinions with us in the comments section below. You can also join our 91Wheels Auto Enthusiast Telegram group (click via mobile to join) curated exclusively for the fans, enthusiasts and the owners. Further, subscribe to our YouTube channel for more such amazing motoring updates.