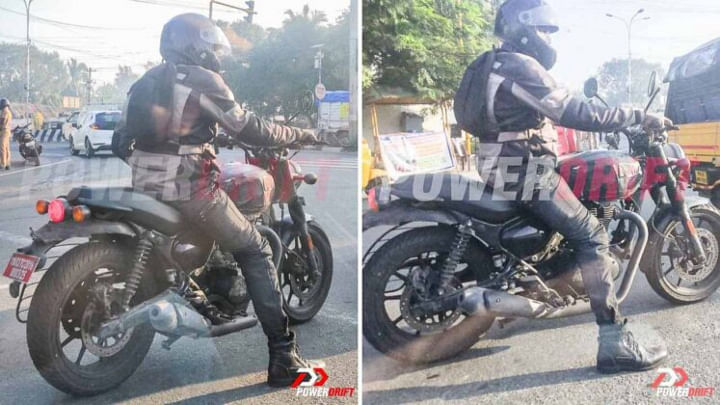 Royal Enfield Hunter 350 roadster has been spied yet again. Up and close spy shots have this time revealed more details about the upcoming product.

Its been roaming around for some time now. Multiple test mules have been spied and the news that Hunter 350 shall make it to the launch by mid-2022 is already on fire.

In the recent spy shots captured of Hunter 350, here are the details which were prominently visible:

Visible through the spy shots, Hunter is based on a more upright roadster bike posture as that of Yezdi Scrambler. Large tear-drop fuel tank, round headlights, round indicators and round mirrors add-on the retro appeal of Hunter's design.

While the riding posture is more upright than the siblings such as Classic, Hunter still looks ergonomically relaxing. A comfortable single seat with enough cushioning is visible on the test bike.

An upswept single side exhaust, which is small in size, perfectly fits the roadster design language. Seen on Meteor 350, a single-round tail light along two grab rails for pillion with an uptight rear mudguard makes Hunter look masculine from rear-end.

Also Read - Cars With No Discounts In February 2022 - Check Details

As Royal Enfield is on a technological advancement train, Hunter will be no exception like the newly launched Classic and Meteor. A semi-digital instrument cluster with mobile connectivity, tripper navigation, alloy wheels indicating the use of tubeless tyres and dual-channel ABS with front and rear disc brakes will mark their presence on the motorcycle.

Use of large front telescopic forks indicate that Hunter will be able to provide a good riding quality between on-road & off-road tarmac.

Although, no details have been revealed officially but according to reports on internet, Hunter 350 is expected to use the 350cc, single-cylinder, air-cooled engine which produces 20.2 Bhp of peak power & 27 NM of peak torque. Gearbox might be a 5-speed transmission with slip and assist clutch.

Expected to be launched by mid of 2022, Hunter will directly compete the newly expanded segment which includes the Yezdi Scrambler and Honda CB 350 RS.

Tell us by commenting below about what you liked in the upcoming Royal Enfield Hunter 350? Also, make sure to subscribe to our YouTube channel 91Wheels for regular auto-industry updates. 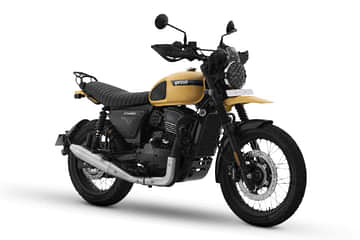