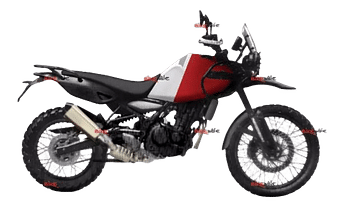 Last Updated On 20th Aug'22:  The upcoming Royal Enfield Himalayan 450 test bike has been spied globally at a fuel station. The test bike looked near production-ready as it featured uncovered body panels. It will be a big engine ADV with more power and the latest on offer.

The upcoming Royal Enfield adventure-tourer will come with a new 450cc engine and is anticipated to produce about 40 bhp of power and 45 Nm of torque from the brand-new engine (the exact figures are yet to be confirmed). It will have a longer stroke and be paired with a six-speed transmission. The motorcycle is also anticipated to get Ride-by-Wire technology.

The new Himalayan will have a more attractive appearance than its predecessors. The design offers a reasonable amount of sturdiness, and some components add to its road presence. A larger around 20-liter fuel tank, an upswept exhaust pipe, bigger mudguards, and an upside-down fork suspension with extra travel are all part of this. based on the spy photos the split seats are also new, and the overall design appears sleeker than the present bike. The side panels have been created with a more 3-D appearance, which nicely reveals the bike's overall design. Royal Enfield designed the Himalayan 450 on a new platform and as an upgrade for riders who need greater power from their off-road motorcycles. The Himalayan 450 will also have wheels that are 21 inches in front and 17 inches on the back.

The new Himalayan 450 will also get a ride-by-wire system, which means it should also get multi-drive models. The RE Himalayan will get 3 ride modes - road, rain, and off-road. This also means that the new Himalayan will get switchable ABS, for those rear wheel lock slides. The instrument cluster will also be a vertical unit, however, there s no confirmation if it will be a colored unit. it uses a bigger twin-split seat setup, a large fuel tank (maybe for increased riding range), and a spoked rim set up as well. The instrument panel is also going to be partially digital while it will support Bluetooth connectivity, rider-assist display functions, and even turn-by-turn navigation.

The Himalayan 450 is anticipated to debut in 2023. It will directly compete with the KTM Adventure 390, therefore its pricing is anticipated to be higher than Rs 3 lakh and could reach Rs 3.30 lakh (ex-showroom, expected).