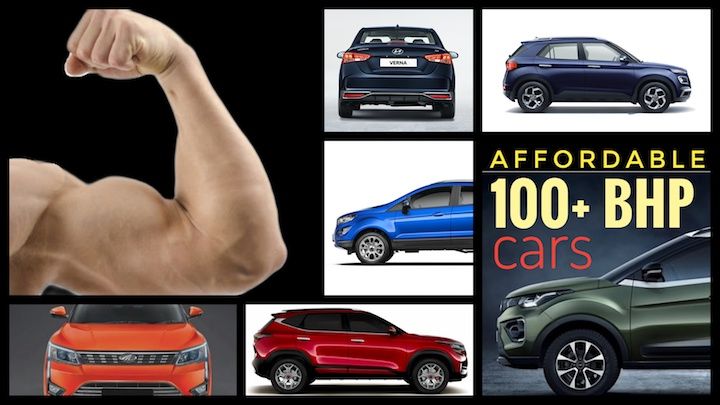 India is a vast market for automobiles and carmakers keep on experimenting by bringing in new technologies under the hood - be it electric vehicles or promoting turbo petrol engines. What remains constant is 'kitna deti hain' quotient as the manufacturers also have to take care of this thing. But at the same time, we have seen an increasing number of affordable 'powerful' offerings. So in this article, we will be telling you top six powerful cars you can get under Rs 10 lakh.

But before we hook you up on the list, we should tell you that these are ex-showroom prices and they differ from the on-road prices! Also, the list is sorted in terms of power output.

Brought in 2013, Ford Ecosport was the top seller in the market and ruled the compact SUV segment. It made its debut with the 1.5L petrol, 1.5L diesel and a 1.0L turbo petrol engine. The latter is now discontinued. Ford Ecosport is majorly sold in its diesel form but that does not take away the petrol charm.

The 1.5L petrol engine churns out 121 bhp on tap which is highest in its segment. The maximum torque sticks to 149 Nm. Transmission is taken care of by a 5-speed manual gearbox and a 6-speed automatic with paddle shifters. Ford Ecosport gets a sticker price of Rs 8.04 lakh 11.03 lakh, ex-showroom, Delhi.

Mahindra will launch the updated BS6 Marazzo soon and this model will continue to get the same 1.5 diesel unit along with a petrol engine. While the specs of the petrol motor aren't known as of now, it's safe to assume the diesel will put out about 120 bhp of power. The Marazzo, at the price it sells for, continues to be a great family MPV. Both 6 and 7 seater configurations will be on avail and an automatic too might make it to the list. It's a pity sales are pretty low.

If there is anyone in the Indian market that has set their image as 'Manufacturing Safest Cars in India', they are Tata Motors. The Nexon has scored 5 stars in the Global NCAP. This car comes in two engine options - 1.2L petrol and 1.5L diesel. The former generates 118 bhp on tap with 170 Nm of torque.

Tata Nexon is also available in electric disguise which delivers more power. However, the prices for the same sticks way above Rs 10 lakh. Tata Nexon with conventional fuel outputs sets you back by Rs 6.95 lakh till Rs 12.70 lakh, ex-showroom, Delhi.

The South Korean carmaker was pretty late to the sub-compact SUV party but it surely came with a bang. Hyundai launched the Venue at Rs 6.5 lakh and it instantly garnered a lot of attention among potential buyers. Also, with the multiple engine options, Hyundai mostly targeted the 1.0L turbo petrol engine.

The 998 cc turbo engine makes 118 bhp on tap with 142 Nm of peak torque. The add on is the optional 7-speed DCT gearbox and 6-speed manual transmission as standard. Other engine options include a 1.2L naturally aspirated petrol and a 1.5L turbo-diesel unit. It starts at Rs 6.7 lakh and goes up to Rs 11.40 lakh, ex-showroom, Delhi.

Honda City (Petrol)
Rs 9.9 lakh onwards || 118 Bhp
Honda City is one of the better-looking sedans in its segment and is due for an update this April-May. And it is the 1.5-litre i-VTEC petrol engine that slipped the City into this competition. This unit generates a whopping 119 PS of power with 145 Nm of torque.

It comes with a 5-speed manual transmission and CVT gearbox with paddle-shifters. Several websites also suggest that the 2020 City might get a mild-hybrid petrol engine too. The prices for the City starts at Rs 9.97 lakh and goes till Rs 14.31 lakh, ex-showroom, Delhi.

The reason why we have clubbed two SUVs of different manufacturers and one sedan is that they all use the same set of engines. The 1.5L naturally aspirated petrol puts out 115 PS of power and is offered in all three models mentioned here. Further, the 1.5 L diesel with the same power is also offered in the Creta under Rs 10 lakh!

All the cars get a 6-speed manual gearbox as standard. The engines are borrowed from the Kia Seltos which made its debut in 2019. Both Creta and Seltos share the same platform. And it is the former which comes with more features.

Mahindra XUV300
We have already covered six powerful cars under Rs 10 lakh in our article but didn't want to miss the Mahindra XUV300. We say it because it is the only compact SUV which comes with a powerful diesel engine under Rs 10 lakh. This SUV is based on the Ssangyong Rivoli which is sold internationally. Mahindra offers two engine options - 1.2L petrol and a 1.5L diesel engine and it is the latter which generates 115 bhp on tap.

In other news, Mahindra is also bringing in a much powerful turbo petrol unit for the XUV300. This engine will produce 130 bhp on tap and will take on the likes of Hyundai Venue. It is expected to come in the second half of April.