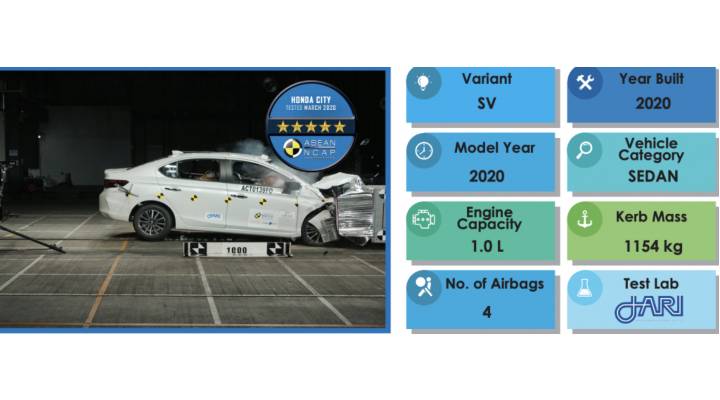 The 2020 Honda City is the much-awaited mid-size sedan for the Indian market and the launch has been delayed because of coronavirus. However, to bring in some good news, the new Honda City has scored 5-star rating at the ASEAN NCAP which was conducted in March 2020.

Also Read: 2020 Honda City ? How Is It Different From The Current City?

It is for the third time that Thailand manufactured Honda City scored 5-star ratings by ASEAN NCAP. The first two were the third and fourth generation City's which were tested in 2012 and 2014 respectively.

The 2020 Honda City scored a total of 86.54 points out of 100 in full frontal-offset impact and side-impact tests in the ASEAN NCAP. The new City also scored 44.83 for adult occupant protection, 22.82 for child occupant protection and 18.89 points for safety assist tech.

Honda City is one of the few cars in India that gets a 5-star rating. It competes with the likes of Hyundai Verna, Maruti Ciaz, Skoda Rapid, Toyota Yaris and Volkswagen Vento.

Well, the Thailand version of the City looks similar to what we will be getting in the Indian market, it is the mechanicals which differs from the one sold globally.

The India-spec 2020 Honda City will come in both petrol and diesel engine in BS6 forms. The former produces 119 bhp on tap and gets paired with a 5-speed manual gearbox and an optional CVT. The diesel one produces 100 bhp and gets a 6-speed MT. Several websites also suggest that a mild-hybrid engine might be on the offer too but that is scheduled for a later stage.