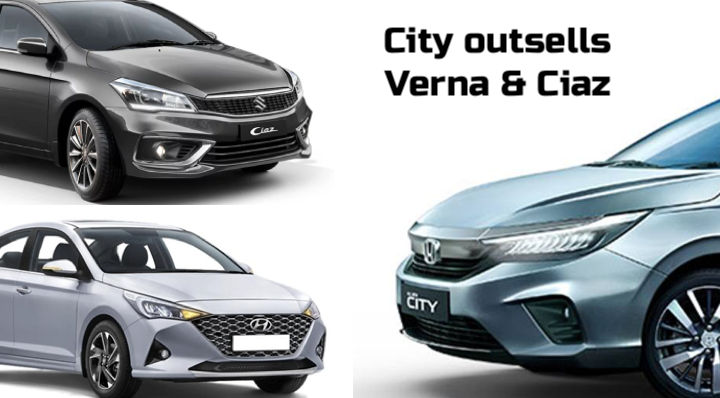 Just recently Honda launched the all-new 2020 City and needless to say, the new design has not only grown in size but also in the level of premium-ness. The sales of the Honda City for July 2020 accounts for 1,975 units making it more popular than the 2020 Hyundai Verna and Maruti Suzuki Ciaz.

Since the 2020 Honda City was launched in mid-July, the sales figures comprise of the new and older version of the City. Also, these numbers could be dispatch numbers. That means to build up the stocks at several dealerships across India.

Nonetheless, Honda City has still come ahead in terms of sales when seen with the rivals. Currently, both the fourth and fifth-generation are on the sale. Both the cars come with different petrol engines and only the newer one gets a 1.5L i-DTEC diesel engine now.

Coming to the diesel, the newer engine is now BS6 compliant and makes 98.6 bhp and a peak torque of 200 Nm. It also gets a 6-speed manual gearbox but then misses out on the CVT like petrol. Honda Amaze which is its younger sibling also gets the option of automatic in diesel but the City doesn't.

New Honda City also is best in class in terms of features and we will share some segment-first list it gets. It gets full LED headlamps, DRLs, LED turn indicators and Z-shaped 3D LED wraparound taillights. The new City is also India's first car to get Alexa remote capability.

As far as safety features are concerned then it also gets a Lane Watch Camera which we have seen in the Civic. A wide-angle camera is mounted down below the passenger side ORVM and shows the blind spot anytime you put the indicator to left or turn on the system. This newer City also gets G-force in the 7.0-inch MID screen.