2021 Ford EcoSport Facelift Spied In India For The First Time Ever - Launching Soon?

Ford EcoSport is a very popular sub-compact SUV in the Indian market. The EcoSport was first launched in India in the year 2013. Over the years, it got several cosmetic and mechanical updates and a major facelift in 2017. Now, the SUV is all set to get another facelift update. The new 2021 Ford EcoSport Facelift has been recently spied on test in India for the first time ever.

Ford EcoSport Facelift - What To Expect?

The upcoming new Ford EcoSport Facelift has been recently spied on test in India. The test mule was partially camouflaged but we are still able to make that at the front, it will get a revised grille, new front bumper, new L-shaped LED DRLs and circular foglights. The facelifted EcoSport will get new five-spoke alloy wheels too, but, at the rear, it won't get any changes. On the inside, it might get new upholstery and an updated infotainment system.

The new 2021 Ford EcoSport Facelift is expected to be launched in India by the festive season of this year. It is currently priced between Rs 8.19 lakhs - Rs 11.69 lakhs, Ex-showroom Delhi and the facelifted model might charge a slight premium over these prices. Are you excited about its launch? Do feel free to share your opinions with all of us in the comments section below. You can also join our 91Wheels Auto Enthusiast Telegram group (click via mobile to join) curated exclusively for the fans, enthusiasts and owners. Further, subscribe to our YouTube channel for more amazing motoring updates. 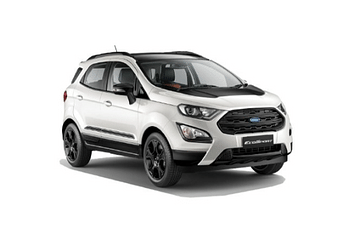