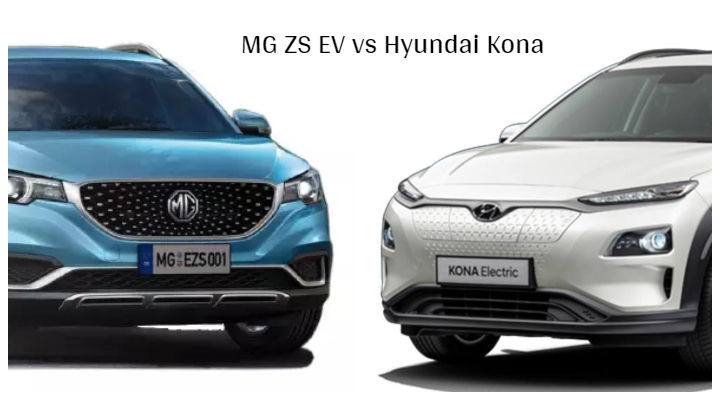 MG Motor India has introduced its second product, the ZS EV here in India with pricing set to be announced very soon. Yes, an electric SUV which directly locks horn with the established Hyundai Kona. The eSUV will be brought in via CKD (Completely Knocked Down) route and is all set to launch later this month.

Now, the MG ZS EV grows in dimensions when compared to the Hyundai Kona in every sense. The recently unveiled electric SUV is longer by 134 mm, wider by 9 mm and is taller by 50 mm. The kerb weight of the MG ZS EV stands at 1502 kg than the 1535 kg of the Hyundai Kona. Both the e-SUVs gets 17-inch alloy wheels.

Surprisingly, MG ZS EV gets a larger battery of 44.5kWh than the 39.2 kWh of the Hyundai Kona. However, the driving range of the ZS eSUV is a mere 340 km than the 452 km of Kona. The MG ZS EV comes with 5 different chargers - Portable, Home/Office Chargers, Fast Chargers at Dealerships, Charge on the Go and Extended Charging Network.

The Hyundai Kona battery can be juiced from 0-80% in 57 mins with the fast charger while the MG ZS EV takes just 50 mins. If plugged in via the AC charger then the ZS EV can take about 6-8 hours to charge while the Kona does the same job in 6hr 10min.

The ZS EV does a claimed sprint from 0-100 km/h in 8.5 seconds while the Hyundai Kona does it in a flat 9.7 seconds. Both cars are equipped with a single-speed automatic transmission.

Thee 44.5 kWh battery of the MG ZS EV produces 143 bhp with a peak torque of 353 Nm. Hyundai Kona is powered by a 39.2 kWh battery which generates less power that is 136 bhp than its rival but produces more torque at 395 Nm.

Also Read: All You Need To Know About Hyundai Kona Electric Facelift

Let us take you through the design of both these electric SUVs and how they differentiate from each other. The recently unveiled MG ZS EV is the second SUV after the Hector. And in terms of designing, it carries a simple design with automatic projector headlamps with LED Daytime Running Lights upfront. The grille resembles the Mercedes A-Class and gets a charging socket beneath the MG logo. The highlight of the eSUV is a sky roof and bigger space in the rear seat. The rear profile gets LED taillights and the Internet Inside badging just like the Hector. It sits on 17-inch diamond-cut alloy wheels.

Talking about the Hyundai Kona then the front of this is aggressive with the design itself speaks as if its a car from the future. The LED projector headlights with LED DRLs along with the sealed grille are what one will see when viewing it from the front angle. The flared wheel arches, loads of body cladding and the slim LED taillights complete the look of this SUV.

Hyundai Kona was launched in the Indian market on July 9, 2019, and since then the car has managed to sell in a good number. It starts at a price of Rs 23.86 lakh while the dual-tone colour options start at Rs 24.05 lakh. All prices stick to ex-showroom, Delhi.  Coming to the MG ZS EV, the car was unveiled on Dec 5 and the prices are yet to be announced. It directly competes with the Kona EV so we can expect that the price bracket of this eSUV is expected to be around Rs 22.50 lakh (ex-showroom, Delhi).