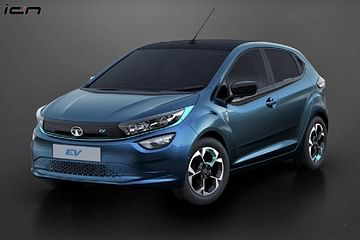 Altroz EV is a Hatchback car from Tata. Tata is expected to be launched at a price of Rs. ₹ 12.00 Lakh in Indian automobile market.

Tata had unveiled the electric version of the Altroz at the 2020 India Auto Expo. Back then, it was expected that the Altroz EV would go on sale in the second half of 2020. The pre-production model that was showcased at the expo did reveal some of the specs, which we have discussed below. But most of the information about the upcoming electric hatchback is yet to be confirmed by Tata.

The pre-production Altroz EV that was showcased at the Expo, looked very similar to its non-EV counterpart, except for some key differences. Just like the other EVs in Tata’s line-up, the Altroz EV also boasted an exclusive Teal Blue body paint. The front fascia gets a concealed grille with blue accents, instead of chrome, and star patterns on the front air dam. The alloy wheels displayed an aerodynamically friendly design as well. The rear fascia looks the same as those LED taillights, but the lack of tailpipes give away the EV pedigree.

Just like its petrol counterpart, the cabin of the Altroz EV is expected to remain familiar as well. However, the absence of a mechanical gearbox transmission will open up quite some space in the centre console. The single-speed gearshift selector is in front of the armrest, and the centre console has been split to resolve storage issues. The rest of the dashboard looks the same as well, including the steering wheel. However, whether the Altroz EV will get the same semi-digital instrument cluster or a fully digital one, just like the Tiago EV and Tigor EV, remains to be seen.

Some of the features that the Altroz EV is expected to share with its petrol counterpart include automatic climate control, an infotainment system that supports both Apple CarPlay and Android Auto, ambient lighting on the dashboard and the doors. On the safety front, the Altroz EV should come with 2 standard airbags for the driver and the passenger side, ABS with Central Locking, an Anti-theft alarm, Child door lock, ISOFIX child seats, Rear camera, and seat belt pretensioners to name a few. However, Tata Motors is yet to confirm the exact features list of the Altroz EV.

The Tata Altroz EV is expected to be powered by the same Ziptron powertrain, also available with the Nexon EV. This powertrain equips a permanent magnet AC motor, in this case, it is a 95 kWh electric motor, that powers the front wheel. The electric motor draws power from a 30.2 kWh Lithium-ion battery in the Nexon EV, and the battery capacity might be bigger in the Altroz EV. Tata claims that the Altroz will have more mileage than the Nexon’s ARAI-certified 312 km of range. The manufacturer also claims that the Altroz’s battery will take 60 minutes to charge from 0-80% when plugged into a fast charger.

As we’ve mentioned before, the Altroz EV was supposed to launch in late-2020, but the pandemic postponed it. Now, the Altroz EV is expected to go on sale in the first half of 2022. Being the only premium electric hatchback in the segment, expect Tata to price the Altroz EV at around Rs. 12 lakh.

Have a question in your mind about Tata Altroz EV?