2022 BMW 7-Series has been revealed to the world. The 7th generation of the flagship sedan from BMW is now bigger, more tech-laden, and luxurious.

The flagship sedan from the German car manufacturer has been revealed in its latest iteration. Breaking the cover, the 2022 BMW 7-series sedan has vowed the global auto world with its radical design change and the tech-laden reform. The new executive sedan has grown big, is now more luxurious, and hosts a completely new platform.

With the unveiling of the much-awaited breakout, the BMW engineers have done a wonderful job in designing the newest iteration of the 7-series. The whole layout of design has undergone a plethora of changes which recently launched BMW cars such as the new BMW X7 SUV, have been hinting lately.

The front now hosts a big iconic BMW kidney-grille (bigger than the previous-gen car). Along with this, the headlights have undergone a split treatment which means the DRLs and the main headlights are parted away. as seen over the new X7 SUV. Large side air dams support the sharp and upright posture of the frontal design. The L-shaped 14-LED DRLs also act as turn indicators. BMW kidney-grille has also backlit as soon as one approaches the car.

To go with the flow, a bold shoulder line runs from the front fender to the tail lights providing the side profile a monolithic surface design. The alloy wheel design is identical to the current-gen 7-series but with slight changes to the overall outlook. Available exclusively in the long-wheelbase version, the rear doors are large enough to support easy ingress-outgress for passengers. The new 7-series also get body-flushed door handles and windows with invisible seals; accentuating the overall design.

At the rear end, the new 7-series loses out the single LED bar from the previous car. The LED-tail lights are now fender-fitted and slim in design as well. The upright set boot lines and sharp bumper lip makes the outlook futuristic. Air dams have been provided at the rear bumper to enhance aerodynamic support.

BMW has equipped some segment-first features in the new 7-series. The tech-laden limousine now hosts the following features:

BMW has introduced the new 7-series with a total of 4 engine variants: 735i, 740i, 750e xDrive, and the M760e xDrive. All of these powertrain options will boast the use of mild-hybrid technology for better fuel economy and fewer emissions. Also, BMW has bid adieu to their V12 engines with the latest 7-series; meaning it'll only be available with inline-6 cylinder and V8 engine options.

The 750e xDrive will be a plug-in hybrid limousine that will use an 18.7 kWh electric motor combined with an inline-6 cylinder petrol engine; producing a peak power output of 490 hp and peak torque of 700 Nm. Via the electric motor, the 750e will be capable of covering 89 km of distance on pure electric power.

Also, for the first time in its history, BMW will introduce a plug-in hybrid M-Sport 760e xDrive 7-series. This PHEV M-sport performance iteration will use a combination of V8 petrol with the 18.7 kWh electric motor thus making peak power of 571 hp and peak torque of 800 Nm.

The current generation of 7-series is sold between Rs 1.42 - 1.76 Crore ex-showroom in India. With the new tech-laden and feature-rich 7-series; this price is slated to go higher once the limousine makes it to launch in India. For now, a global launch is awaited for the car. Once launched internationally, the 2022 BMW 7-Series will be launched soon in India.

Drop a comment down below and tell us what you think about the new-gen 7-series sedan. Also, make sure you subscribe to the 91Wheels YouTube channel. Do become a member of the 91Wheels WhatsApp community for regular automotive updates. 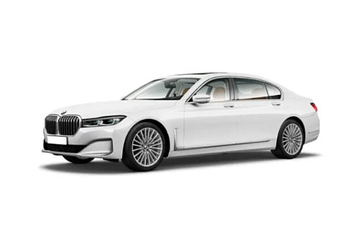