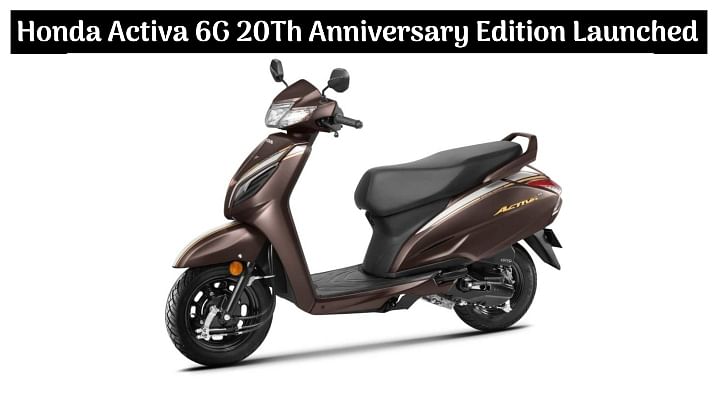 Honda Activa is one of the most popular scooters in the Indian market. The Activa is a household name in our country. In India, people term all gearless scooters as Activa and thus you can understand how popular it is and that the Activa is not just a name, it has become a brand in itself! The Honda Activa was first launched in India in the year 2000. Over the years, it has received several updates and now it has completed its glorious 20 years in the Indian market. So, to commemorate this occasion, the company has launched the new 20th Anniversary Edition of the 2020 Honda Activa 6G.

The new 20th Anniversary Edition model of the Honda Activa 6G gets an all-new Matte Mature Brown colour scheme. This new royal colour scheme does look very good and it gets matching rear grab-rails too. Also, it has received several other cosmetic updates that make this celebratory edition more charming than the regular variants of the Activa 6G. Talking about some other changes, this new anniversary edition model sports the shiny embossed 20th-anniversary logo and the special golden Activa logo in bold. It also gets new attractive silver-coloured stripes on the body panels, brown inner cover, black-coloured steel wheels and a black crankcase cover.

The mechanicals of the scooter remains the same as before. It is powered by a new BS6-compliant 109.61cc, single-cylinder, air-cooled, fuel-injected mill. This motor churns out 7.79 PS of maximum power at 8000 RPM and 8.79 Nm of peak torque at 5250 RPM. The engine comes mated to a CVT. Talking about its price, the new 20th Anniversary Edition of the 2020 Honda Activa 6G will be available in two variants - Standard and Deluxe. The Standard variant has been priced at Rs. 66,816 while the Deluxe variant will retail at Rs. 68,316. All prices stick to Ex-showroom Gurugram, Haryana. The new 20th Anniversary Edition variants of the scooter are around 1,500 rupees expensive than the corresponding regular variants of the BS6 Activa 6G.

Also Read: `KODA India Has Announced Mega Service Carnival This Winter - All Details About It

Talking about the 20-year journey of Activa, Mr Atsushi Ogata, Managing Director, President & CEO, Honda Motorcycle & Scooter India Pvt. Ltd. said, "The legend was born 20 years ago when Honda realized The Power of Dreams of India with its debut model - Activa. Since then, every new generation of Honda Activa has introduced Indian riders to advance global technologies ahead of time - be it Combi-Brake System in 2009 (a decade before the norms), Honda Eco Technology (HET) in 2013 or the latest enhanced Smart Power (eSP) technology and 26 new patent applications in 2020 Activa 6G. Celebrating Indian customers love and trust on Activa - the true gold standard of unisex family commute, we are delighted to launch the special 20th Anniversary edition of Activa 6G."

Introducing the 20th-anniversary edition of Activa 6G, Mr Yadvinder Singh Guleria, Director - Sales & Marketing, Honda Motorcycle & Scooter India Pvt. Ltd. said, "Delighting lacs of new customers every month, Activa is the torchbearer of India's two-wheeler industry. We are proud to be a part of the everyday life of incredible India. Today, there is hardly any place in India where you can't spot an Activa. As the first choice of every Indian family, this specially curated 20th-anniversary edition is to celebrates Activa's inseparable bond with our customers. Starting from the brand new Matte Mature Brown colour which is the first-ever introduction on any Honda scooter to the distinctive gold embossed logos and more distinctive design cues, Activa 6G - 20th-anniversary edition is as precious as gold!"

The Honda Activa is indeed a legend in the Indian two-wheeler industry! Till date, over 2 Crore Honda Activas have been sold in the country. The Activa has always been a bread and butter product for Honda in India and over 2 lakh units of Activa are currently sold in India every month. It rivals against the TVS Jupiter, Hero Maestro Edge 110, Hero Pleasure+, TVS Scooty Zest 110, etc. in the Indian market. What are your thoughts on the success journey of Honda Activa? Do share with us in the comments section below. You can also join our 91Wheels Auto Enthusiast Telegram group (click via mobile to join) curated exclusively for the fans, enthusiasts and the owners. Further, subscribe to our YouTube channel for more such amazing motoring updates.