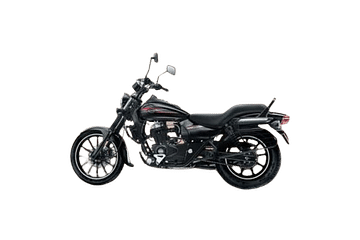 Avenger 400 is a Cruiser bike from Bajaj. Bajaj Avenger 400 is expected to be launched at a price of Rs. ₹ 1.50 Lakh in Indian automobile market.

Last Updated On 8th Jul'22: The Bajaj Avenger 400 will be an upcoming high-capacity cruiser variant of the Avenger model. The Avenger has already become an iconic bike for its cruising capabilities & American cruiser-like styling. Much loved by Indian customers for its performing engine & fuel-economical setup; Avenger 400 might be soon launched in India. The new Avenger 400 will be designed to cater to the audience looking for a comfortable straight-line cruiser motorcycle with power available on-demand every time. The anticipations hint toward the mechanicals being shared with the Dominar 400 naked sports bike from Bajaj. This means, the Avenger 400 will embrace a new longer chassis and it’ll be larger in dimensions in every way.

The upcoming Bajaj Avenger 400 will be a bigger version of the existing Avenger 220 Cruiser. The design will make it competitive against the bigger capacity motorcycles from the rivals as such the Royal Enfield. Bajaj will also make sure to beef up the upcoming Avenger 400 with loads of features; making it stand firm against the tech-rich rivals. Additionally, the overall dimensions of the upcoming Avenger 400 are also anticipated to become bigger. Speaking of features, we suspect that a digital instrument panel with smartphone Bluetooth connectivity will surface on the upcoming Bajaj Avenger 400. Along with this, features like USD front suspension, dual-channel ABS, alloy wheels, bigger disc brakes, LED lighting, tubeless tyres, and different riding modes will mark their way.

Bajaj Avenger 400 will be based on the bigger capacity engine. This engine is suspected to be sourced from the Bajaj Dominar 400 naked sports bike. This engine is further sourced from KTM Duke series motorcycles and it is vouched for its power & torque figures. Bajaj used the detuned version of this engine on the Dominar and the bike sold in good numbers across India. The same engine that produces around 35 hp of power shall feature on the Bajaj Avenger 400. Along with this, specs like USD forks, twin-gas charged rear suspension, dual-channel ABS, riding modes, etc., will feature on the upcoming Bajaj Avenger 400. This engine is expected to undergo required changes like the ECU remaps and gear ratio changes to adjust with the new chassis and dimensions of the bike.

Have More Questions about Bajaj Avenger 400?