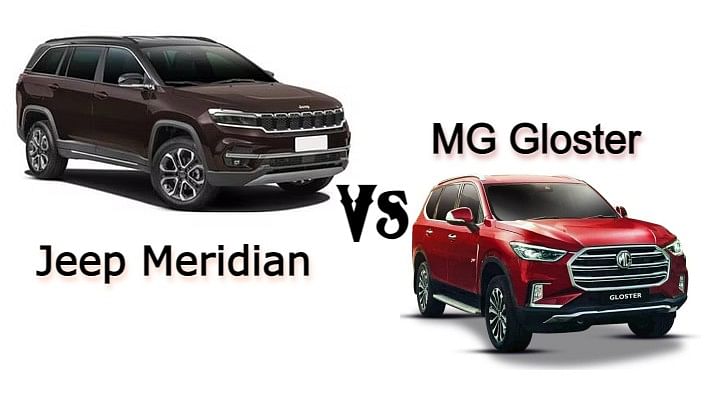 Based on the Jeep Commander that is sold in Brazil, but hailed as the bigger version of the Compass in India  the recently unveiled Jeep Meridian is a premium offering that will compete against the MG Gloster. Which one sounds better on paper?

Jeep recently unveiled their new three-row SUV, the Meridian. This India-specific SUV might look like the Compass, but it is bigger in every aspect than the latter. The Meridian is based on the Commander that is sold in Brazil but with 82% localization, the latter is as Indian as ever.

On the other hand, the MG Gloster looks quite like the hunky-dory SUV, with premium looks and power from every angle. This MG SUV is the epitome of the companys line-up and is in the same segment where the Meridian is launched.

Below here we have compared how both the SUVs sound on paper, and which one would be the more value for money choice, as far as its spec-sheet comparison is concerned.

Design-wise, both are conventional-looking SUVs and with boxy designs. But the design of the Jeep Meridian feels more assuring, which is in line with some of the American SUVs. The exterior of the Gloster does exude muscles, and if imaginations are stretched, at times might also resemble a Prado. However, one of the key differences between the SUVs lies in the fact that the Gloster sits on a body-on-frame chassis, but the Meridian gets a Unibody chassis.

Also Read: Jeep Compass And Compass Trailhawk Now Expensive Than Before - Here Are The Latest Prices

The Jeep Meridian gets a diesel engine option only. It comes with a 2.0-liter diesel engine that produces 168 bhp/ 170 Ps and 350 Nm of torque. It is powered by a 6-speed manual gearbox, but theres also an optional nine-speed automatic, with a front-wheel-drive system as standard. The Meridian can also be had with an all-wheel-drive system, along with frequency-selective dampers, as optional fittings.

The Gloster is powered by a standard twin-turbocharged 2.0-liter diesel engine option only. This unit produces 218 Ps of max power @ 4000 RPM and 480 Nm of torque@ 2400 RPM. The base power and torque figures are rated at 163 Ps and 375 Nm. The engine comes \ mated to a standard 8-speed automatic transmission, with both 2WD and 4WD options.

Summary: Theres no arguing the fact that Gloster gets the more powerful engine. But with official fuel consumption figures yet to be confirmed, our guess is the Meridian gets the more efficient engine.

The interior of the Meridian is aesthetically the same as the Compass. Starting with the dashboard, which houses a 10.1-inch floating touchscreen, and the 10.25-inch TFT instrument cluster behind the three-spoke functional steering wheel. Aside from that, it gets dual-zone climate control, wireless charging, wireless smartphone connectivity, automatic rain-sensing wipers, cruise control, powered tailgate, 360-degree camera, panoramic sunroof, four-terrain modes, and an 8-way electrically adjustable driver's seat, and ventilated front seats.

One of the biggest party tricks of the Gloster is the Advanced Driver Assist System (ADAS), which gets you Adaptive Cruise Control, Autonomous braking, Lane Keep Assist, Blind Spot Monitor Control, Forward Collision Warning, Auto Park Assist, and a Driver Fatigue reminder system. The larger dimensions of the Gloster also open up more space in its third row, speaking of which, the cabin also features 64- ambient lighting, and fronts seats with memory functions.

Summary: The Gloster does have a feature-rich cabin, but the Jeep Meridians cabin feels more rich and premium. The ADAS is one of the big advantages that the Gloster gets.

Both the Jeep Meridian and Gloster are big SUVs, with tons of potential. As far as their exterior appeal is concerned, both do fit the ex-showroom price i.e. upwards of Rs. 30.00 lacs SUV. However, the Jeep does feel more premium, compared to the Gloster. Ride quality - which will become one of the most detrimental factors behind which SUV to buy - is expected to be more exciting in Meridian, compared to the plush ride quality of the Gloster.

Also Read: Here Is How MG ZS EV Owners Can Charge Their Cars For Free!

For more well have to wait until we get our press car from Jeep. Post which, well be able to give you thorough analysis. As far as on-paper comparison is concerned, the Gloster makes more sense.What about you? Which SUV would you prefer? Let us know in the comment section. In the meantime, do join our exclusive 91Wheels WhatsApp and 91 Wheels Telegram groups where you can also know more about vehicles, conduct discussions on your favourite ride, and much more! You can also subscribe to our Youtube channel for video content on the latest from the world of cars and motorcycles. 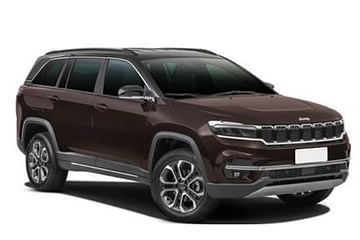