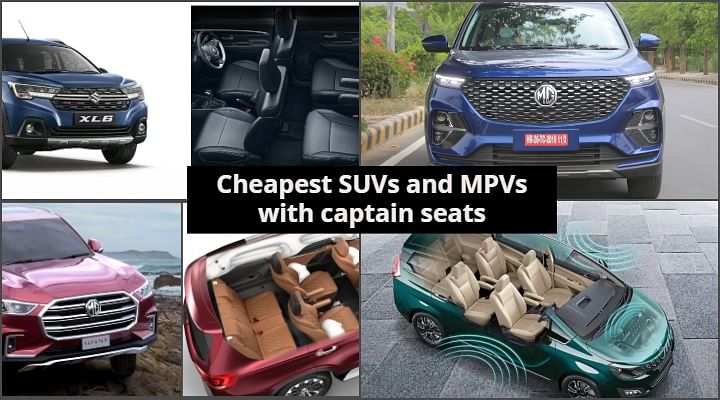 The Indian market is quite evolving - be it adapting to new technologies, lifestyle or welcoming new cars. With the wide variety of options, we Indians are aware of what are we looking for in the market and for the cars, here in this article, we will be mentioning about seven cheapest SUV and MPV with captain seats in the middle.

Before we start out with the details, make sure you have joined our exclusive 91Wheels Whatsapp group where we share from latest automotive news to what's happening in the Indian Automotive Industry.

One of the most affordable MPVs with captain seats in the middle is the XL6 from Maruti. Basically, some say it as the beefed-up version of the Ertiga but be that as may, the interiors on this one do look premium. The all-black theme inside and captain seats at the middle and the right pricing at just Rs 9.85 lakh, makes it a better buy. The top model fetches till Rs 11.52 lakh, ex-showroom, Delhi.

Mechanically, the XL6 comes only with a 1.5L naturally aspirated petrol engine which makes both the city and highway drive good. This one produces 103 bhp with a peak torque of 138 Nm and gets 5-speed manual stick shift and an optional four-speed torque converter gearbox.

If you are someone who is tight on budget and want a 7-seater vehicle with captain seats with a diesel engine, the Marazzo has got you covered. It starts with a price tag of Rs 11.25 lakh and top model fetches till Rs 13.59 lakh, ex-showroom, Delhi.

The Marazzo gets premium interiors with captain seats in the middle if you choose the 7-seater version. It also offers 8-seater but only pick that if you have more members. Under the hood, it gets a 1.5-litre turbocharged diesel which makes 121 bhp and 300 Nm of peak torque. It is a better alternative to the big Toyota Innova Crysta.

The Hector Plus marks its entry in our section of cheapest SUV and MPV with captain seats in the middle. With a starting price tag of just Rs 13.74 lakh, ex-showroom, Delhi, it even undercuts the mighty Toyota Innova Crysta which is actually an MPV.

Moreover, the Hector Plus provides connected technology inside, a larger panoramic sunroof, voice command on the go, front parking sensors, multiple airbags and much more. The interiors are finished in tan and black colour scheme which gives the cabin a rich and airy feeling. The MG Hector Plus is really the affordable SUV if you are looking to seat four adults and two children.

The Innova has been the segment killer for a really really long time now. Yes, being the best in its segment, it is known for space, reliable engine and good aftermarket sale value. All of which adds to an advantage in the sales of this MPV.

It gets 7-seater and 8-seater option and its prices fetch till Rs 24.68 lakh, ex-showroom, Delhi which is a bit on an expensive side. It gets both petrol and diesel engine serving its purpose well. The 2.4L diesel makes 148 bhp on tap with a maximum torque of 360 Nm while the 2.7L petrol sticks its figures to 164 bhp with 245 Nm of peak torque. It is the former which accounts for up to more sales in the market.

Kia's second product, Carnival created a lot of buzz when it was first launched. The premium option to the Toyota Innova Crysta offering as much as 9-seats, made us wonder how well it can seat that many people on the inside. Well, our answer came in when we had the top of the line Limousine variant for us with a few days and it looked exactly like the 1 BHK a person dreams of.

The captain row in the middle seats really boasted enough space to stretch your legs and the dual electric sunroof was there to make you less claustrophobic. It gets a 2.2L oil burner which makes as much as 200 Ps of power and gets an 8-speed automatic unit.

The SUV will launch on October 8 and comes in four variants - Super, Smart, Sharp and Savvy. The six-seat configuration sticks to Smart and Savvy while the Sharp gets 7-seat and 6-seat as options. The Super variant which is the base gets 7-seat layout as standard. As of now, the prices are not out but we will update you once the SUV gets launched.