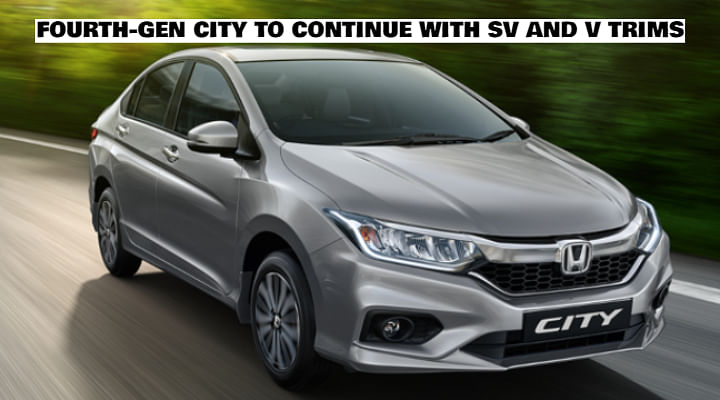 After a long wait, Honda finally launched the fifth-gen City in the Indian market, The sales have started and it is doing really good for the brand. Honda City has always been the source of bread and butter for Honda India. So much so that Honda hasn't even discontinued the fourth-gen City. It will be on sale even now, in two variants - SV and V. Both the variants will come with petrol MT powertrain as diesel and petrol CVT are discontinued.

The fifth-gen City is leaps and bounds better than the older City and Honda has done its homework well. The fourth-gen City will come with the older BS6-compliant 1.5-litre petrol engine mated to 5-speed manual transmission. The engine sports the older SOHC layout rather than the new DOHC on the fifth-gen model. The older engine churns out 117bhp and 145 Nm of torque whereas the new one gets 119bhp. The fifth-gen City also gets the 1.5-litre diesel from the Amaze and WRV and also the option of petrol CVT.

Also read: Honda Civic First Look Review - Is It All The Sedan You Ever Need?

If we talk about the variants on offer, the fifth-gen City comes in three variants - V, VX and ZX which are further segregated in petrol MT, petrol CVT and diesel MT trim. The fourth-gen City, with the BS6 update, used to come in SV, V, VX and ZX trim. Now Honda has dropped the upper two trims and retained the SV and V trims. The SV and V trims of the fourth-gen City were priced at Rs 9.91 lakh and 10.66 lakh ex-showroom. You can see detailed prices of the fourth-gen and fifth-gen City petrol in the table below - do note that dealers will offer some discounts and offers on the old City, not the new one.