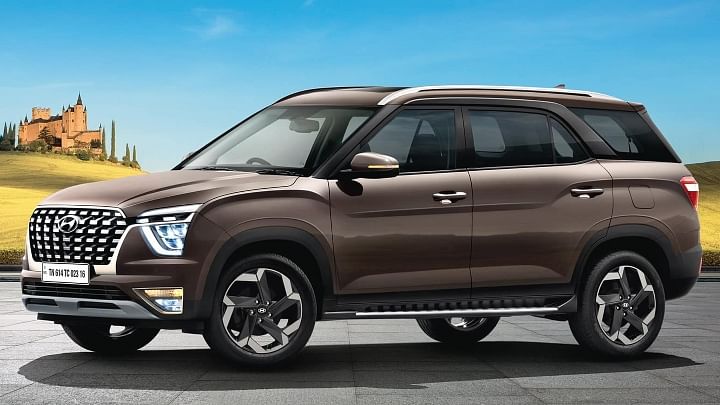 Hyundai Motor India Private Limited has finally launched the new Hyundai Alcazar three-row SUV in the country. The new Hyundai Alcazar has been recently launched in the Indian market and its price starts at Rs 16.30 lakhs, Ex-showroom Delhi. What's interesting is that Hyundai India has already received 4000 bookings for the Alcazar so far. So, in this article, we have shared with you the variant-wise detailed report on it & some other details.

The official pre-bookings for the new Hyundai Alcazar three-row SUV began in India on June 15, 2021. One can book the SUV online or offline by paying a fully refundable token amount of Rs 25,000. Hyundai India received 4000 bookings for the new Alcazar SUV even before it was officially launched. The company has received 33 per cent reservations for each variant. Also, diesel variants account for 55 per cent bookings while 45 per cent bookings have been made for the petrol variants. But, things just don't end here.

Hyundai India further states that both the manual as well as the AT variants of the Alcazar have received the same amount of bookings. This new three-row SUV from Hyundai is available as a six-seater as well as in the seven-seater layout. According to the company, around 60 per cent bookings were made for the six-seater version of the SUV while the remaining 40 per cent of bookings accounted for the seven-seater version. Hyundai says that the Alcazar has been specifically developed for the Indian market. The waiting period of the SUV currently ranges between 4-8 weeks depending on trims.

Also Read: New Yamaha FZ-X Launched in India - Check Out Price and All Other Details

The price of the Hyundai Alcazar ranges between Rs 16.30 lakhs - Rs 19.99 lakhs, Ex-showroom Delhi. Have you booked it yet? Do feel free to share your opinions with all of us in the comments section below. You can also join our 91Wheels Auto Enthusiast Telegram group (click via mobile to join) curated exclusively for the fans, enthusiasts and owners. Further, also subscribe to our YouTube channel for more amazing motoring updates.