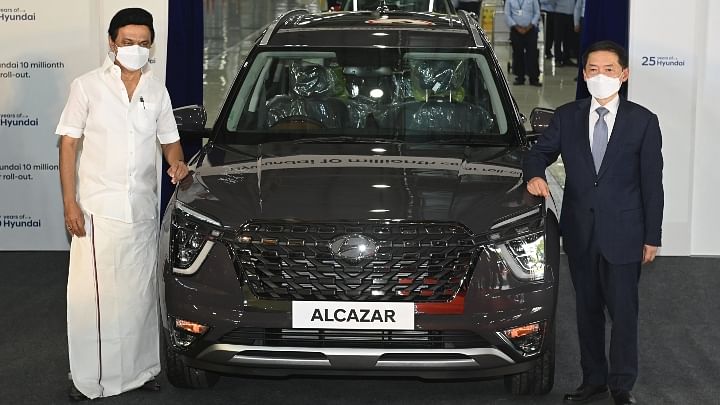 Hyundai is a well-known name in the Indian market. This South Korean car manufacturer entered the Indian market in the year 1996 and launched its first car in India in September 1998 which was the humble Hyundai Santro. Now, the company is celebrating its glorious 25 years of existence in India and at the same time, it has achieved another big milestone. Hyundai has today rolled out the 10 Millionth car from its manufacturing plant in India and the celebratory 10 millionth unit is the recently launched new Hyundai Alcazar three-row SUV. Here we have for you all the details about it.

Hyundai is a South Korean car manufacturer. The company entered the Indian market in the year 1996. In September 1998, Hyundai India began operations at its Tamil Nadu facility and it was Hyundai's first integrated car manufacturing facility outside of their home country South Korea. At the same time, in September 1998, the company launched its first car in India, Hyundai Santro, and then onwards it was no turning back. The 1998 Santro was an instant hit in India and within a couple of months, Hyundai became the second-largest carmaker in India and the largest automobile exporter in the country, which Hyundai proudly holds on to even today.

Hyundai India rolled out its first millionth car which was again the Santro in the year 2006. It took Hyundai around 8 years of production to achieve the first big milestone. So, while the first million took around 8 years, the last million (from 9 million to 10 million) took just around 21 months which is commendable. Thus, Hyundai India managed to achieve the 10 Million production milestone in around 23 years and this makes it the fastest car manufacturer in India to unlock this achievement in such record time.

The 10 Millionth car to be rolled out from Hyundai's plant was the recently launched Hyundai Alcazar. Commenting on the occasion, Mr S S Kim, MD & CEO, Hyundai Motor India Ltd., said, "This historic milestone of the 10 millionth car roll-out is a testimony of Hyundai's commitment towards the Make in India initiative." What are your thoughts on Hyundai India's this big achievement? Do feel free to share your opinions with all of us in the comments section below. You can also join our 91Wheels Auto Enthusiast Telegram group (click via mobile to join) curated exclusively for the fans, enthusiasts and owners. Further, also subscribe to our YouTube channel for more such amazing motoring updates.