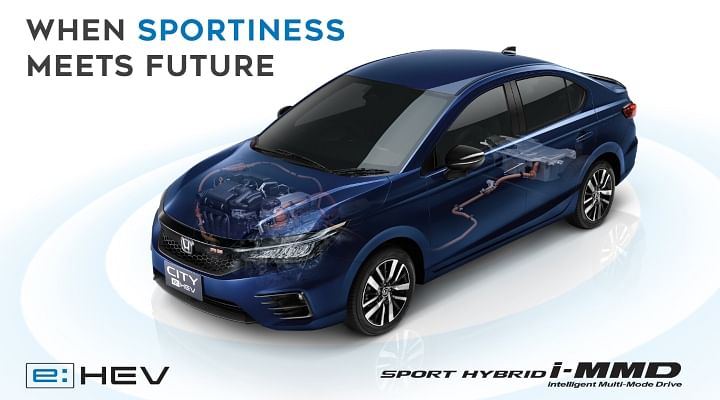 Honda hosted an event in Thailand which saw the launch of the 2021 Honda City Hatch and Honda City Sedan Hybrid. The 2020 Honda City now gets the i-MMD hybrid powertrain and yes, it is India bound. Interestingly, the City Hybrid only comes in the sportier RS trim. With the claimed fuel economy of 27.8 km/l, it will be the preferred choice of buyers looking for fuel economy.

On the face of it, there is nothing much which has been changed, save for the "e:HEV" badging before the RS badge. The interiors of the Honda City Hybrid are all-black and doesn't have anything changed. Talking about the powertrain which is the biggest change, the new City Hybrid gets a 1.5-litre Atkinson-cycle petrol engine mated to an electric motor. The electric motor produces 108PS and 253 Nm of torque and powers the front wheels. The battery pack is said to be hiding under the boot of the car.

Talking about the engine which in question is the 1.5-litre Atkinson cycle petrol engine. It puts out 98 PS and 127 Nm of torque, mated to a single-speed gearbox. The engine is also mated to an electric motor acting as an integral starter and generator. Honda has also plonked in a lot of interesting features like lane departure warning, collision mitigation braking system, adaptive cruise control and much more. Regular features include 8.0-inch touchscreen infotainment, part-digital instrument display, steering mounted audio controls and more.

Also read: 2021 Honda City Hatch Revealed in Thailand - Will This Ever Come to India?

Earlier reports suggested that Honda will consider the 2020 Honda City hybrid for the Indian market. As India bound Honda City Hybrid is now revealed in the international markets, India launch can be on the cards for early 2021. However, the City Hybrid will be priced much higher than the IC counterparts. For instance, the City hybrid is around 2 lakh Rs more (converted) than the regular RS model. In India, we expect Honda to launch it in the range of Rs 18-20 lakh.