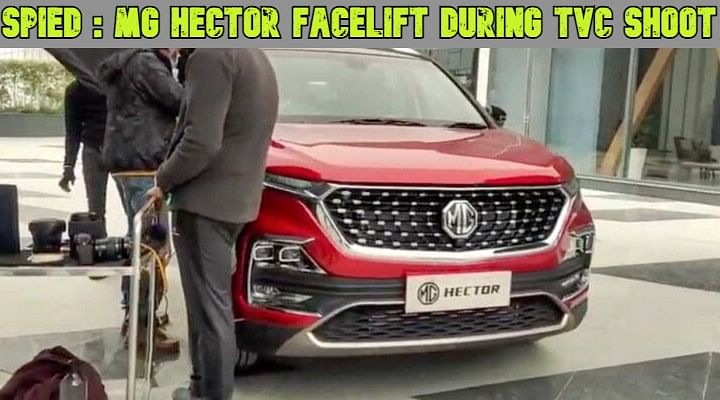 The Hector is one of the most successful products out of all the 4 cars that Morris Garages sells in India. It was also reported that the MG Hector will be receiving a facelift in 2021. Recently we happened to get spy shots of MG Hector Facelift completely undisguised during a TVC shoot.

The Hector facelift aims to bring the current model in line with the Hector Plus variant that is being sold in the market. The facelift comes with a revised front grille with black mesh and satin grey surrounds. It also gets chrome outlines on the grille which extend to the headlamps. This design feature is taken from the South American Chevrolet Captiva which in essentiality is a rebadged MG Hector.

The Hector facelift is also expected to come with 18-inch alloy wheels instead of the 17-inch alloys offered before. This comes as a welcome addition as the alloys offered earlier did look a lot out of place on the car which had gargantuan proportions. A black garnish with a chrome underline that connects the tail lamps is also a part of the exteriors update

Interiors are expected to remain the same though with the exception of the addition of additional interior trim options. The infotainment of the car will be carried over to the facelift as well. Expect the iSmart suite of connected car tech to be updated as well. It is also reported that in addition to all these features, an auto-dimming IRVM will also be offered.

While the Hector facelift is a bit early compared to timelines for facelifts in general, one must remember that Tata launched the Harrier facelift earlier this year with the Jeep Compass facelift just round the corner. Prices are expected to carry a slight premium over the current ones. Currently, the MG Hector retails at Rs 12.83 lakh to Rs 18.08 lakh.

What do you think of the MG Hector facelift that was spied undisguised during TVC shoot? Let us know through your comments. Also, join our 91Wheels Auto Enthusiast Telegram group (click via mobile to join) to be a part of interesting automotive discussions. Further, subscribe to our YouTube channel for more such amazing motoring updates