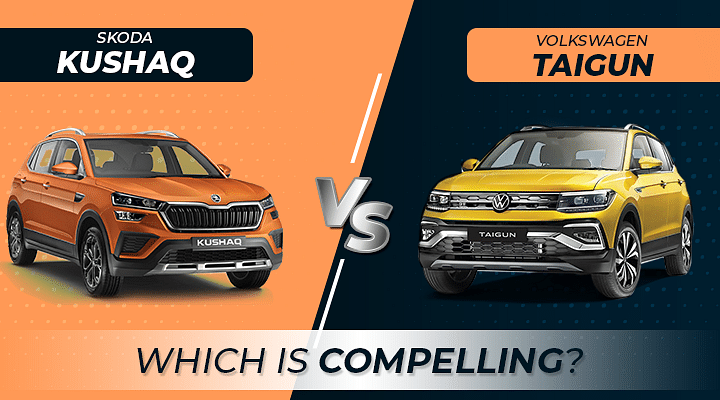 Skoda Auto India Private Limited recently unveiled its all-new mid-size SUV called the Skoda Kushaq. The grand world premiere of the Kushaq in India was followed by the virtual global debut of the all-new Volkswagen Taigun. Both these mid-size SUVs are a part of the VW group's new India 2.0 project. They are based on the same MQB A0 IN platform, share mechanicals with each other and a lot more. So, today in this article, we have done a quick spec comparison of the new Volkswagen Taigun vs the new Skoda Kushaq.

The Volkswagen Taigun is an elegant SUV just like most other VW products. The VW Taigun gets a chrome-plated radiator grille with sleek projector headlamps along with LED DRLs. The fog lamps are positioned below with thick chrome accents around them. Moving to the side profile, one can see 17-inch dual-tone alloy wheels and at the rear, it gets LED taillamps with a connecting treatment. The new VW Taigun gets skid plates at the front and rear and there is body cladding all-around to lend it a rugged appeal. The company has not yet officially revealed the colour variants for the SUV.

Talking about the new Skoda Kushaq, so it has a youthful character and it looks very striking. At the front, the Kushaq gets Skoda's signature butterfly grille with chrome accents flanked by all-LED headlights that also get LED DRLs. The side profile of the SUV houses 17-inch machined-cut alloy wheels, roof rails, etc. and at the rear, it gets LED taillights, a sharkfin antenna, and bold SKODA lettering on the tailgate. It gets skid plates at the front and rear and body-cladding all-around for a SUVish appeal. The Skoda Kushaq will be available in five colour options. They are Brilliant Silver, Candy White, Carbon Steel, Honey Orange and Tornado Red.

Skoda Kushaq will be loaded with features upto the brim. It will get a 7-inch touchscreen, ESC and ambient lighting as standard across all the variants. The higher trims of the SUV will get a 10-inch touchscreen with Android Auto and Apple CarPlay connectivity along with SmartLink tech, 6-speakers, wireless smartphone charger, a new two-spoke steering wheel, an electric sunroof and Skoda's Climatronic system among many others. The safety features will include upto six airbags, ABS with EBD, front and reverse parking sensors with a rear parking camera, TPMS and many more.

Talking about the Taigun, the company has not yet showcased its interiors. However, we do have some idea as to what all features it will pack. The VW Taigun will most likely get a big 10-inch touchscreen with Android Auto and Apple CarPlay connectivity, 6-speakers, wireless smartphone charger, an all-digital instrument cluster, ventilated seats, an electric sunroof among many others. The safety features of the car will include upto six airbags, ABS with EBD, reverse parking sensors with a rear parking camera, TPMS, ESC, etc.

The Volkswagen Taigun will be launched in India later this year just before the festive season kicks in which means around the month of August 2021. The Skoda Kushaq will be launched by June this year and the bookings for the same will also commence soon. If we talk about the expected pricing, so the Kushaq and the Taigun are expected to be priced between Rs. 10 lakhs - Rs. 17 lakhs, Ex-showroom Delhi. Upon launch, these cousins will directly rival against the likes of the Kia Seltos, Hyundai Creta, Nissan Kicks, etc.

So, this was all about the all-new Volkswagen Taigun vs the Skoda Kushaq. Now, between these two upcoming mid-size SUVs, which one will be your personal pick? Do feel free to share your opinions with all of us in the comments section below. You can also join our 91Wheels Auto Enthusiast Telegram group (click via mobile to join) curated exclusively for the fans, enthusiasts and owners. Further, also subscribe to our YouTube channel for more such amazing motoring updates.