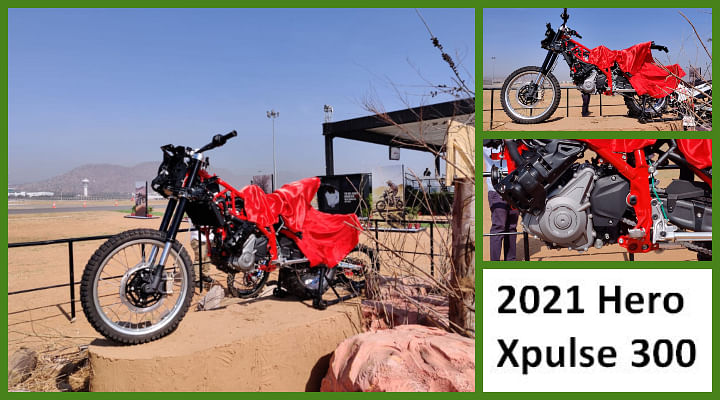 Hero had an interesting concept on display at the 2020 Hero world. It has gained so much popularity thanks to the growing culture of off-road adventure for two wheels as well. Hero Motocorp hadn't disclosed exact facts and figures of the Xpulse 300 at the event but we come to know certain details about the 2021 Xpulse 300 ADV from Hero Motocorp.

This new ADV motorcycle from Hero will have a 300+ cc engine and will be the biggest offering from Hero in India. Not only the displacement of the engine, but this new engine will also be the first one to get liquid cooling as well. Inspecting closely reveals the new Trellis frame which comes as a surprise as Hero hasn't used a trellis frame in any of their motorcycles in India. Trellis frame will come out as an advantage with this motorcycle as it is simpler to build and lightweight with added rigidity too.

As the engine will be more than 300cc in displacement, we expect it to produce around 25-30 PS. The main highlight of the engine will be the low-end torque which will help to defeat trails and steep climbs with ease. We can't say much about how the final product will look like as the bike showcased had no body panels. 2021 Hero Xpulse 300 will be thoroughly engineered and very capable. The concept bike was equipped with USD forks, tube-type tyres, spoke rims, bash guard, Bybre front brake calliper and single-piece handlebar.

The Hero Motocorp is still developing the Xpulse 300 and it will take around a year to hit the dirt. The longer development time is needed to tackle the fierce competition in the budget ADV bikes segment which includes RE Himalayan, BMW 310 GS and KTM RC 390 Adv. We can expect really competitive pricing owing to the Hero' cunning strategies to price their bikes well. Plus, Hero will be exporting this motorcycle to markets where it is very strong - including Mexico, Argentina and Brazil.

What do you think about the upcoming Xpulse 300 motorcycle from Hero? Tell us in the comments below!