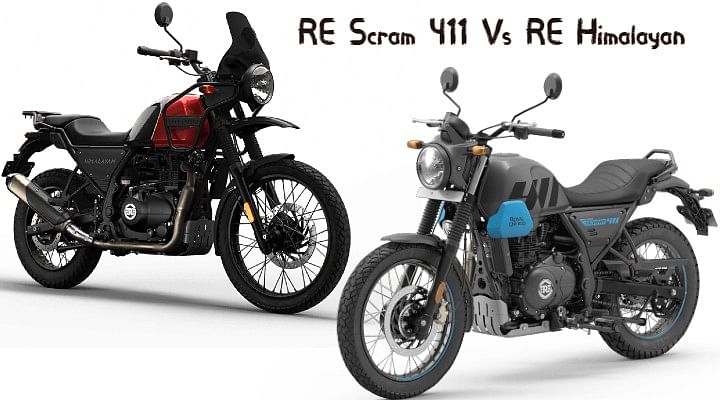 The Scram 411, Royal Enfield's most awaited scrambler motorcycle, was launched last month. The motorbike is based on the foundations of the well-known Royal Enfield Himalayan ADV. These two horses from the same stable share a lot of similarities, yet they also have some differences. Here's is a quick comparison of RE Scram 411 vs RE Himalayan and the key difference between them.

RE Scram 411 vs RE Himalayan: Design

The Himalayan is purely an adventure motorcycle and it has the elements which loudly tell its ADV character. On the other hand, the Scram 411 is more of a dual-purpose motorcycle which will support you if you want to take it for a spin away from the tarmac. Starting from the front end, the Himalayan has a windscreen atop the headlight whereas the Scram 411 doesn't get one. Instead, it has a cowl around the headlight.

The Scram 411 has a lower handlebar that is more oriented towards the rider, as well as a 5 mm lower seat height than the RE offroader. The RE scrambler is also 5 kg lighter than its ADV counterpart, making it slightly easier to handle.

RE Scram 411 vs RE Himalayan: Suspension and Braking

RE Scram 411 vs RE Himalayan: Instrumentation and Feature

In keeping with its ADV persona, the RE Himalayan boasts a significantly more complete instrument cluster. In addition to the speedometer and other lights, you have a tachometer, compass, and Tripper navigation pod.

On the other hand, the instrument pod on the Scram 411 is similar to the one on Meteor 350. The digital display for the fuel gauge, odometer, trip meter, and other functions are available in the analogue speedometer. On the Scram 411, Royal Enfield offers the Tripper Navigation as an option.

RE Scram 411 vs RE Himalayan: Engine Specs

Both motorbikes get their power from a 411cc engine and have the same mechanical specs. The engine has a power output of 24.3 horsepower and a max torque of 32 Nm. The Scram 411's engine has been modified to meet the bike's characteristics. In both bikes, a five-speed constant mesh gearbox is available to support the engine.

RE Scram 411 vs RE Himalayan: Price Difference

What are your thoughts about the Scram 411 vs Himalayan? Do let us know in the comment section below. Also, join 91Wheels WhatsApp and 91 Wheels Telegram groups to know more about vehicles, conduct discussions on your favorite ride, and much more! You can also subscribe to our Youtube channel for video content on the latest from the world of cars and motorcycles. 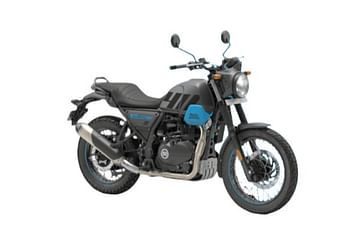