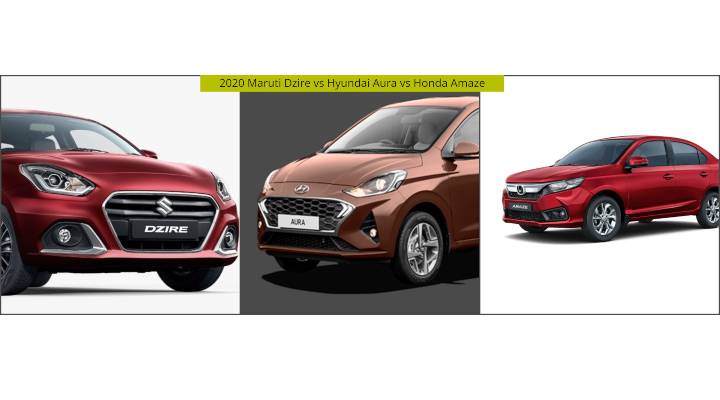 Just a few days ago Maruti dropped a bomb with the all-new Dzire and it was not just some design changes the sub-4-metre carried. The 2020 Dzire now gets an all-new engine, features, design tweaks and among other changes. And this in this article, we will be comparing 2020 Maruti Dzire vs Hyundai Aura vs Honda Amaze.

The dimensions of the new Dzire remains the same regardless of the mild facelift it gets. And like before, it is wider than both of its competition at 1,735 mm. Also, the ground clearance is more by 5 mm which in turn gives some rest over bad roads. The wheelbase of Maruti Dzire and Aura sticks at 2,450 mm while Honda Amaze amazes us by giving an extra 20 mm of wheelbase.

Also Read: 2020 Honda City ? How Is It Different From The Current City?

The biggest change is the replacement of the old 1.2L engine for a new 1.2L Dual-Jet motor in the 2020 Maruti Dzire. This engine produces more power and torque along with improved NVH levels and an increased ARAI certified fuel efficiency.

It produces 89 bhp of power on tap with same 113 Nm of peak torque. The fuel efficiency now sticks to 23.26 km/l for the MT and AMT sees 24.12 km/l. Transmission option sticks the same to a 5-speed MT and an AMT gearbox.

The petrol engine might not be powerful of the lot but it seamlessly focuses on delivering high mileage figures which is again a concern for many buyers in the country. Also, the 1.3L DDiS diesel engine is now phased out from the portfolio. It's competitions, however, gets oil burner as an option.

Design
The all-new Maruti Dzire now gets tweaked design at the front which looks boring in my opinion. The foglight housing are new and gets chrome garnishing and so does the new single-piece chrome grille.

Hyundai Aura is a successor to the Xcent and gets an uber-cool design. Yes, the rear seems like the design is unfinished but nevertheless, Hyundai packs in several comfort features inside and a punchy turbo petrol engine under the hood to take eyes off the design.

Honda Amaze gets the old school, sophisticated design that really picks up with Maruti Dzire. However, with the lack of projector headlights and other features makes it an overpriced affair from its rivals.

The all-new Dzire 2020 packs in a new design, new features and gets an improved engine under the hood. And so the prices for the same have increased by a marginal Rs 8,000 - Rs 22,000 extra for on-road.