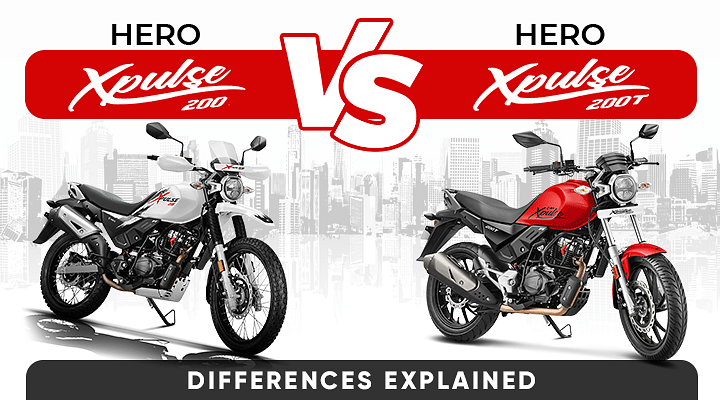 In recent times, adventure motorcycles have become very popular in India. A lot of bike manufacturers have now come up with affordable adventure tourers in their portfolio and one such bikemaker is Hero MotoCorp. The company launched the new Hero Xpulse 200 in May 2019 and it became an instant hit. The Xpulse 200 is the most affordable ADV in India and we also have its touring version called the Xpulse 200T. So, today in this article, we will be comparing the new 2021 Hero Xpulse 200 vs the Xpulse 200T BS6.

So, these were the major differences between the Hero Xpulse 200 and the Xpulse 200T. Also, they get a distinct cosmetic appeal and different colour variants too, which is quite obvious. Talking about the powertrain option, so both these motorcycles are powered by a BS6 compliant 199.6cc, single-cylinder, oil-cooled engine. They also get Hero's XSens programmed fuel-injection technology that delivers better performance and fuel-efficiency. This BS6 motor churns out 18.1 PS of power at 8500 RPM and 16.15 Nm of peak torque at 6500 RPM. They come mated to a 5-speed manual gearbox.

The Hero Xpulse 200 is priced at Rs. 1.15 lakhs while the Xpulse 200T BS6 is priced at Rs. 1.13 lakhs. All prices stick to Ex-showroom Delhi. This was all about the new 2021 Hero Xpulse 200 vs Xpulse 200T BS6. So, between these two motorcycles which one will be your personal pick? Do feel free to share your thoughts with all of us in the comments section below. You can also join our 91Wheels Auto Enthusiast Telegram group (click via mobile to join) curated exclusively for the fans, enthusiasts and owners. Further, also subscribe to our YouTube channel for more such amazing motoring updates.