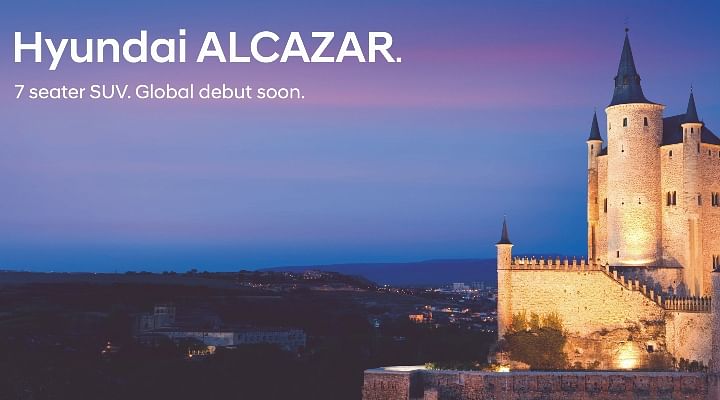 It's no secret that Hyundai is working on a seven-seater version of the Creta. The upcoming new Hyundai Creta seven-seater SUV has been spied on test several times, both in India as well as abroad and it was expected to make its public debut soon Now, it's finally official that the company is bringing the seven-seater SUV and it will make its World Premiere in India soon. The new upcoming seven-seater SUV from Hyundai will be called the Alcazar.

Now, just a few months ago, we got to know that Hyundai has trademarked the Alcazar name in India. To read more about it, you can click HERE. We all assumed that it might be the name of the production version of the new seven-seater Creta and yes, it's just that! The press release of Hyundai reads that "The Hyundai ALCAZAR has been developed to personify reliability and indulgence while drawing its inspiration from the royal lineage of Castles and Palaces, denoting grandeur, spaciousness and solidity."

The new Hyundai Alcazar seven-seater SUV will share a lot of things with the Creta. Both these South Korean SUVs will have the same underpinnings and mechanicals. At the front, the Alcazar will get the same fascia, but with a revised grille that will sport chrome studs and will get new front parking sensors too. The side profile of the car will be identical but it will be around 30 mm longer and a bit taller than the Creta. It will get usable roof-rails too. The SUV will feature rear quarter-glasses for the third-row passengers and it might get a longer wheelbase too to accommodate three rows of seats.

Talking about transmission options, the 1.5-litre gasoline will be mated to a 6-speed manual and a CVT. Then, the 1.5-litre diesel motor will be coupled to a 6-speed manual and a torque-converter AT while the powerful 1.4-litre turbo-petrol engine will come mated to a 7-speed DCT only. Commenting on the announcement, Mr S S Kim, MD & CEO, Hyundai Motor India Ltd., said, "The year 2021 will add a new chapter in HMIL history, as we gear up to enter and redefine a new segment. Hyundai ALCAZAR will supersede the aspirations of new-age buyers and redefine existing benchmarks to ensure customer delight. As Hyundai completes 25 years in the country, we will re-emphasize our commitment to Indian customers with the Global Debut of Hyundai ALCAZAR that is 'Made in India' and 'Made First for India'."

The new Hyundai Alcazar will make its World Premiere soon in India. Upon launch, it will rival against the likes of the new MG Hector Plus, Tata Safari, Mahindra XUV 500, etc. We expect that the upcoming Hyundai Alcazar to be priced in the range of Rs. 14 lakhs - Rs. 20 lakhs. All the prices stick to Ex-showroom Delhi. What are your thoughts on its name? Do feel free to share your thoughts and opinions with all of us in the comments section below. You can also join our 91Wheels Auto Enthusiast Telegram group (click via mobile to join) curated exclusively for the fans, enthusiasts and owners. Further, subscribe to our YouTube channel for more such amazing motoring updates.