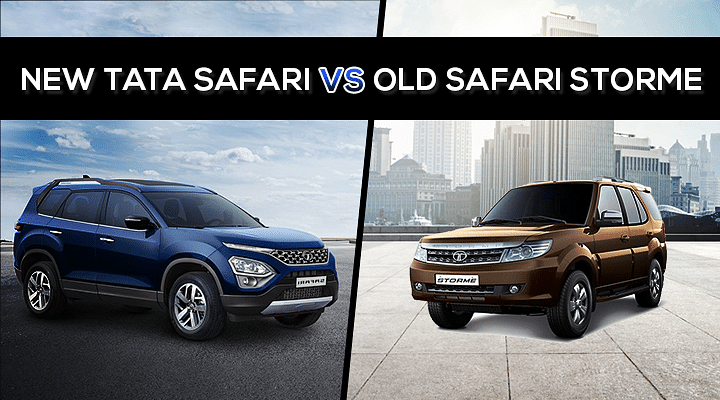 Tata Safari is an iconic SUV in Indian Motoring History! The Safari is an SUV that enjoys cult status and fan-following like few others in our market. This legendary SUV was first launched in the Indian market in the year 1998 and over the years, it has become synonymous with the rich and the powerful. It has received plenty of upgrades and generation changes over the years and now the Safari moniker is back once again! The company has just launched the new 2021 Tata Safari in India and we thought of comparing the all-new Tata Safari vs Old Safari. So, let's have a look at the images, specs and price.

The all-new 2021 Tata Safari is powered by a BS6 compliant 2.0-litre, four-cylinder turbocharged diesel engine. This diesel motor churns out 170 PS of maximum power and a whopping 350 Nm of peak torque. The oil-burner comes mated to a six-speed manual gearbox and it gets a six-speed torque converter automatic transmission too. The Old Tata Safari Storme, on the other hand, was powered by a 2.2-litre VariCOR diesel engine which used to churn out 156 PS of power and 320 Nm of peak torque in the 2015 facelifted model. The engine was mated to a 5-speed manual gearbox and while it had 4X4 with a limited-slip differential, the new Safari doesn't get it as of now.

Also Read: Renault Kiger vs Magnite vs Sonet vs Nexon vs Venue vs XUV300 vs EcoSport vs Vitara Brezza - Spec Comparison

The Tata Safari Storme was launched in India in the year 2012. At that time, it was priced between Rs. 9.95 lakhs - Rs. 13.66 lakhs, Ex-showroom Delhi. However, its last recorded price of 2019 was between Rs. 11.09 lakhs - Rs. 16.44 lakhs, Ex-showroom Delhi. The all-new 2021 Tata Safari, on the other hand, has been launched in India today and it has been priced between Rs. 14.69 lakhs - Rs. 21.45 lakhs. All prices stick to Ex-showroom Delhi. Now, you let us know New Tata Safari vs the Old Safari, which one will be your pick? Feel free to share with all of us in the comments below. You can also join our 91Wheels Auto Enthusiast Telegram group (click via mobile to join) curated exclusively for the fans, enthusiasts and owners. Further, subscribe to our YouTube channel for more such amazing motoring updates.