Upcoming Maruti CNG Cars In India - Here Is Everything That We Know! 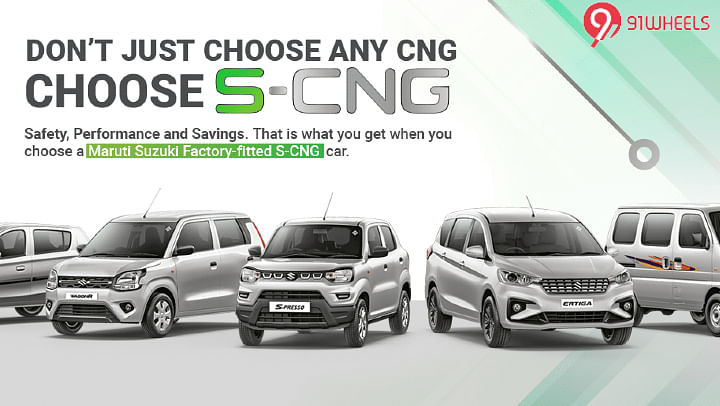 The fuel prices are rocketing through the roof and the car buyers are now struggling to cope up with the ever-rising running costs. In addition to this, restricted diesel vehicle's and expensive diesel cars too have pushed the buyers away from the fuel-efficient oil burners. The buyers, because of these factors, are now shifting to CNG powered cars as they are not only affordable but also offer extremely low running costs. The brands too are using it as an opportunity and are launching a number of new CNG powered cars in the Indian market. Maruti Suzuki currently has the largest portfolio of CNG cars and is now expected to introduce as many as five new CNG cars in India. Here is a list of the top five upcoming Maruti CNG cars in India.

The Maruti Swift is currently one of the best selling hatchbacks in the Indian market and boasts an extremely sporty design and a spacious cabin. The car also offers a long list of features on the higher variants that make it a great choice for a wider range of buyers. Powering the Swift is the brand's latest 1.2-L dual-jet motor that can be had with a 5-speed manual or an AMT gearbox. The Swift CNG will be powered by the same engine but is expected to have lower engine tuning. A number of changes to the mechanicals too will be made to accommodate the CNG kit. Once launched, the Maruti Swift is expected to enjoy strong demand in the market and will rival the cars like the Hyundai Grand i10 Nios CNG. On the safety front, the Swift gets features like rear parking sensors, dual airbags, seat belt reminders, etc.

Also Read: Tata Tiago CNG Vs WagonR CNG - Here Is What We Can Expect

Next, on our list of upcoming Maruti CNG cars in India is the country's top-selling sedan. The Maruti Dzire competes against the rivals like the Hyundai Aura, Tata Tigor and Honda Amaze. Just like the Swift, the Dzire too is powered by a 1.2-L petrol engine that can be had with a manual as well as an AMT gearbox. Striking exterior design, spacious cabin, and dependable after-sales support help the Dire have an edge over many of its rivals. The brand is all set to launch the Maruti Dzire CNG in the coming months. The Dzire CNG will not only be affordable but in addition to this, will also offer commendable boot space and a practical cabin. While it does most many features like rear AC vents, steering mounted controls, etc, the build quality levels could have been better.

The Celerio is one of the best selling CNG hatchbacks in the country and offers an extremely comfortable cabin and an affordable price tag that makes it a great choice for anyone who is looking for a daily commuter. The brand will be launching the next-Gen Celerio in the next few days and the car will be powered by the same 1.0-L K10B motor that we say in the earlier iterations. The CNG variant of the car will come mated to a five-speed manual and will offer commendable fuel economy, thus making it extremely cheap to run. On the features front, the new Celerio is expected to come with a large touchscreen infotainment system, steering mounted controls, power windows, central locking, etc. The car will be larger in dimensions when compared to the present Celerio. The Celerio CNG is the third most affordable CNG car in the brand's line-up after the Alto800 and the S-Presso CNG.

Next, on our list of upcoming Maruti CNG Cars in India is a vehicle that has already tasted success in petrol and diesel avatars. It's no secret to anyone that the Maruti Brezza enjoys strong demand in the compact-SUV segment. Old-school boxy SUV design language, a powerful 1.5-L petrol engine, and an extensive features list make the Brezza a great offering for anyone who is looking for a reliable car. The Brezza, in addition to this, has also scored respectable safety crash ratings. The Brezza CNG will be powered by the same 1.5-L K15B CNG engine that powers the Maruti Ertiga CNG. This engine comes mated to a 5-speed manual gearbox and delivers peak power and torque output of 103 hp and 138 Nm respectively. The Brezza CNG is expected to boast similar specs but will also offer a spacious and accommodating boot.

Also Read: Maruti S-CNG : Check How It Is Safer Than Others!

With the launch of the new WagonR, the brand now offers a VFM package that suits many of the family buyers. A tall boy stance not only helps in easy ingress and egress but in addition to this, also improves the headroom inside the car. Moreover, the cabin too is spacious and wide enough for three people to sit comfortably in the second row. The WagonR can be had with two engine options that include a 1.0-L K10B motor while the higher variants can also be had with a more powerful and refined 1.2-L K12B motor that is also seen on the Swift and the Ignis. While the WagonR currently gets a 1.0-L CNG version, we do expect that the brand may also offer the 1.2-L CNG motor with this car. The same engine will be powering other cars like the Maruti Swift and the Maruti Dzire. The WagonR also offers a long list of features and is a strong contender in the segment. It directly takes on the rivals like the Hyundai Santro and the Tata Tiago.

Check This Out: Tata Punch Vs Maruti Ignis - Here Is Everything That You Should Know!

So, what are your expectations from these top five upcoming Maruti CNG cars in India? Do let us know through the comments section below. Join our 91Wheels Telegram and 91Wheels Whatsapp group to know more about vehicles, conduct discussions on your favourite ride and much more! Also, you can subscribe to our Youtube channel for video content on the latest from the world of cars and motorcycles. Also, connect with us on Facebook, Instagram, and Twitter for more about vehicles!