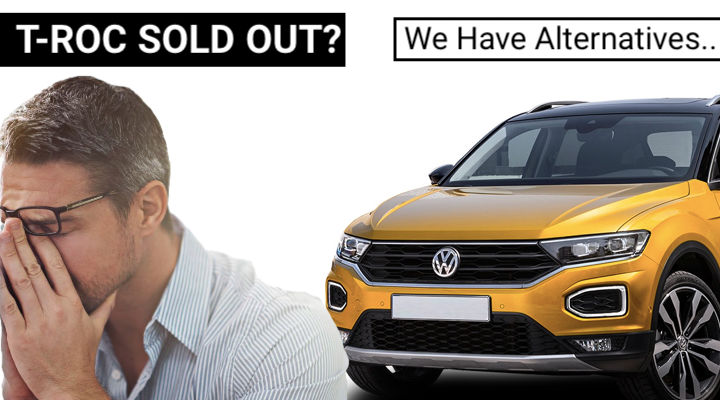 The mid-size SUV segment is getting steep and more and more carmakers are inching towards this segment. Such that Volkswagen brought in its mid-size SUV, T-Roc in the market at s 19.99 lakh and all of its 1000 units are sold. Mind you, this was a complete CBU one. For those who were intimated by its design language, do not worry as the Indian market has quite the alternatives for the Volkswagen T-Roc.

Before we share the alternatives of the Volkswagen T-Roc, here are its spec. It comes in a sole 1.5-litre turbo petrol engine which churns out as much as 150 PS on tap along with a peak torque of 250 Nm. Transmission wise it gets a 7-speed DSG gearbox only! Moving on to its alternatives now:

Here, we pitch the 1.4-litre petrol engine of the Jeep Compass when comparing with the Volkswagen T-Roc. The turbo petrol from the Compass makes 160- bhp along with 250 Nm of peak torque. It comes with a 6-speed manual and an optional 7-speed dual-clutch transmission.

Like the Volkswagen T-Roc, the higher trims of the Compass also get features like a panoramic sunroof, Bi-Xenon projector headlights with automatic function, LED taillights, larger touchscreen infotainment along with modern connectivity features like Apple CarPlay and Android Auto.

Safety features on the Compass include Six airbags, ABS with EBD, ESP, Hill Hold Control, Traction Control, rear parking sensors, front seat belt warning and among others. The prices of the Jeep Compass starts from Rs 16.49 lakh and go up to Rs 21.92 lakh, ex-showroom, Delhi. The prices are strictly for petrol models.

The big brother of popular Creta, Tucson too plays an important choice when people look for a 20 lakh plus mark SUV. Now, the facelifted version of the Tucson is yet to be launched post lockdown, we will be giving out details of its petrol engine only.

It gets a bigger 2.0-litre petrol engine which makes 150 bhp along with 192 Nm of peak torque. The transmission will be taken care of by a 6-speed torque converter unit. The facelifted model will come with features like a panoramic sunroof, electrically adjustable front co-passenger seat, wireless charging, fast charging, floating 8.0-inch touchscreen unit will make debut along with the Hyundai's signature BlueLink Technology and among others. The price is expected to stick between Rs 18 lakh to Rs 23 lakh, ex-showroom, Delhi.

Now, both the Volkswagen T-Roc and the Karoq shares the same platform and similar powertrain. However, the prices of Karoq touches a premium of Rs 25 lakh, ex-showroom, Delhi mark. What makes it more special than the T-Roc? Let's find out!

It is the dimensions where the Skoda Karoq takes an edge over T-Roc. It is 40 mm longer, 22 mm wider and 51 mm taller. The wheelbase too is about 48mm more than the T-Roc and boot space of baby Kodiaq is 76 litres more than the T-Roc. Now, the Karoq also gets as many as 9 airbags as compared to only 6 in the Volkswagen T-Roc. The Karoq continues with ABS with EBD and ESP, ASR, EP Brake, MBA, HBA and an electronic lockable differential.

Let's appreciate this popular Indian SUV that comes in a diesel engine only. I know we are not covering the oil burners but this can make an exception, eh? The Tata Harrier shared its platform with the Land Rover Discovery Sport. The split headlight design gives a RAW look to the car and when viewed from the rear, sure it looks intimidating in the night.