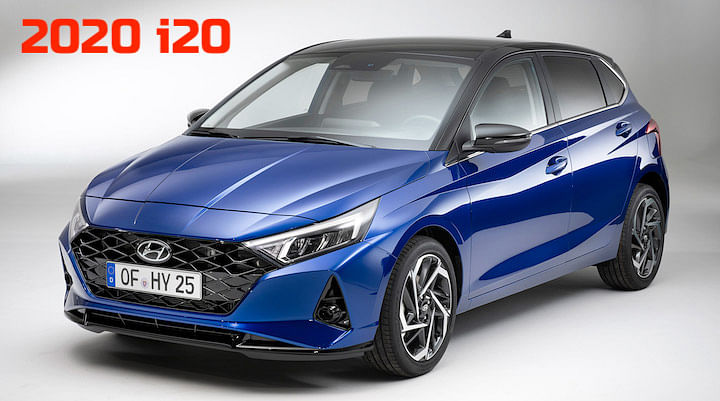 We have all been aware that because of the COVID-19 several industries have been hit and the automobile sector has been at its worst where several of the launches were pushed to later months. Among this, we have the popular i20 from Hyundai which will be seen in its fresh 2020 avatar. The good news is that it is launching soon. In this article, we will cover all you need to know about the upcoming 2020 Hyundai i20.

Yes, the above images briefly explain the new fluidic design of the new i20. Being the premium hatchback, it carries on the expensive detailing and gets all-new redesigned front and rear bumper. The front grille is now tapered and the angular headlight design gives it an aggressive design. The vertical fog light housing draws its inspiration from the new Verna facelift. We do expect it will carry LED treatment on the headlights, DRLs and the taillights.

The side profile gains on new alloy wheels and sharp creases. The rear profile gets stretched out Z-shaped LED taillights which continues its presence on the side profile too. Also, like the Creta, here too you can see the reflector tip joining the taillights.

The all-new Hyundai i20 will be the most versatile in engine options as it will cater to the needs of every buyer. Yes, it will now gain the new 1.0L turbo petrol to rival against the Polo TSI and Tata Altroz Turbo. This one will be sourced directly from the Venue and it has to be seen whether the power figure will stick to 118 bhp and 172 Nm of peak torque or will it be detuned to make it fuel-efficient. Transmission option includes a 6-speed manual and we expect a 7-speed DCT gearbox upon launch. Also, Hyundai's new iMT gearbox will make its way here but only for the mid and top-spec variants.

Another one is the oil burner which is the same as seen on the Venue. The 1.5L turbocharged diesel motor which will make as much as 99 bhp with 240 Nm of peak torque. A 6-speed manual will be observed as standard and if the demand persists, Hyundai might launch the automatic version too but that's another story.

The third and the most humble engine will be the 1.2-litre naturally aspirated unit which makes as much as 82 bhp with 114 Nm of peak torque. It will get a 5-speed manual stick shift and an optional CVT gearbox. Hyundai is really gearing up for the i20 launch as it will be the most feature-loaded hatchback and will carry several powertrains.

The new i20 will carry tons of features like the larger touchscreen infotainment system with modern connectivity features like Apple CarPlay and Android Auto. It will also host Hyundai's signature BlueLink technology which will get as much as 33+ connected features.

Knowing that India is a price-sensitive market, Hyundai will keep the prices intact to improve the sales and also make the new i20 the best seller. We are expecting it to be priced between Rs 5.90 lakh and the top model fetching till Rs 9.99 lakh, ex-showroom, Delhi.