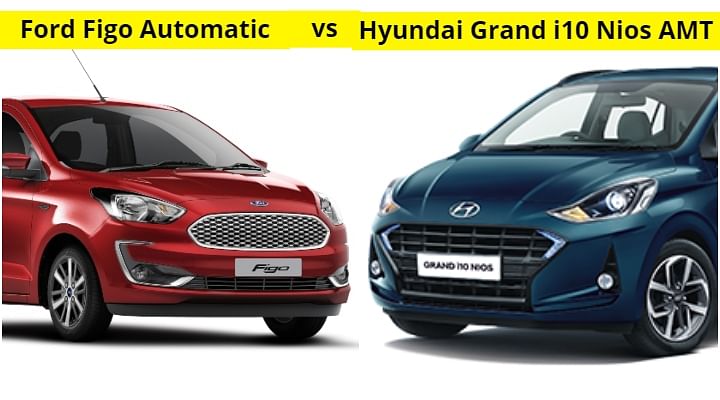 Ford recently launched the Figo Automatic at a price of Rs 7.75 lakh, ex-showroom, Delhi. The hatchback is available in two variants - Titanium and Titanium+ but how does it compete with the already popular Hyundai Grand i10 Nios AMT? Well, we compare Ford Figo Automatic vs Hyundai Grand i10 Nios AMT and share our thoughts on which hatchback wins the value for money quotient.

As per the performance on paper, it is the Ford Figo that packs in more power and punch. The 1.2L, three-cylinder Dragon petrol engine of Figo pumps out 95 bhp with a peak torque of 119 Nm. This engine is mated to a 6-speed torque converter unit and comes with a Sports mode.

On the other hand, Hyundai Grand i10 Nios packs in a 1.2L, four-cylinder engine. This unit generates 82 bhp at 6000 RPM with a peak torque of 114 Nm at 4000 RPM. While the power figures might seem less on the Nios AMT, the mileage figures are better at 21 kmpl. This is the second-best mileage for an automatic hatchback in its segment. Maruti Suzuki Swift AMT leads the way by delivering 23.76 kmpl.

Here, we have included the features that one hatchback has over another. Both the cars are offered with a touchscreen infotainment system but only the Grand i10 Nios AMT offers Apple CarPlay and Android Auto. In fact, the Nios AMT takes a lead in features as it also offers voice command, rear AC vents, two 12V power sockets, a cooled glovebox, projector headlights with LED DRLs and a follow me home function.

The common features on both the hatchbacks are automatic climate control, vanity mirror on co-driver, manually adjustable IRVM, push-button start/stop, tilt-adjustable steering wheel, cup holders at the front, all four power windows with one-touch down driver side window, power-folding ORVMs with turn indicators, rear defogger and wiper and more.

In terms of safety features on paper then Ford Figo Automatic excels as it offers 6 airbags, hill hold control, an electronic stability program and traction control. All of these features are not seen on the Hyundai Grand i10 Nios AMT. Both the cars come with ABS with EBD, front seat belt reminder, high-speed alert system, rear parking sensors and rear camera. Clearly, the newly launched model is the winner of this part of our 2021 Ford Figo vs Hyundai Grand i10 Nios comparison.

Both the cars are offered with a standard 3 years or 1 lakh km warranty. Additionally, the carmakers provide an extended warranty plan too but that comes at a cost. When we bring the Maruti Suzuki AMT into the picture then that hatchback provides only 2 years or 40,000 km warranty.

So this was our 2021 Ford Figo Automatic vs Hyundai Grand i10 Nios AMT comparison for you? Do tell us in the comment section which of these hatchbacks will be your pick and why? Also, read our opinion as to what will happen to the owners or the buyers who have booked the cars if Ford decides to exit India.

Make sure you join 91Wheels Whatsapp as well as the 91Wheels Telegram group. Here, we bring you all the latest information related to the Indian Automotive Industry and you also meet like-minded people. Finally, do subscribe to our 91Wheels YouTube as we bring to you the latest reviews, comparisons, performance runs, mileage tests and more. 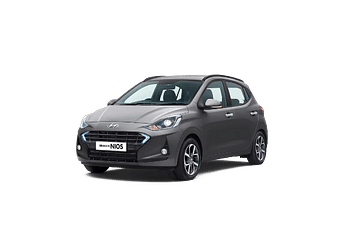