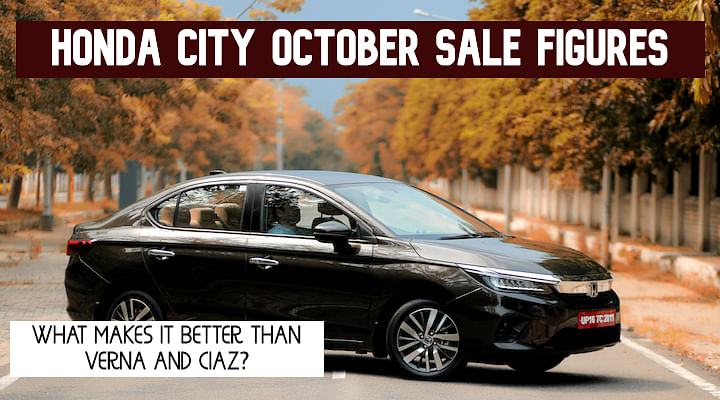 The Honda City has always been know for its elegance and supreme comfort that it offers. The car is not only powered refined and reliable engines but also scores high in terms of driving dynamics. The fifth-gen of the car was introduced in the market not long ago and is now offered with a new 1.5-L i-VTEC motor which has impressed us with its supreme refinement and driveability. Having said that, the Honda City October sales figure reveals that this car was not just the highest selling sedan in its segment, but was ahead of its main rivals, the Verna and the Ciaz, by a huge margin. Read on to know more details about the car.

As per the official figures, a total of 4124 units of the Honda City were dispatched from the factory. Out of these 4124 units, around 90% of these were of the new Honda City while the older, fourth-gen model accounts for around 10% of the total units. Talking of the newly launched Hyundai Verna, a total of 2166 units of the new Verna were dispatched from the factory. It is worth noting that the Verna was the second-highest selling car in the month of October. The Hyundai Verna is now available with multiple numbers of engine-gearbox combinations which also include a new turbo petrol engine with a DCT gearbox.

The Maruti Ciaz on the other hand did not perform as good as the brand would expect it to and the number of total units of the Ciaz dispatched from the factory stands at 1422 only. The Ciaz can only be had with a 1.5-L petrol engine that can be had either with a manual or with a 4-speed AT gearbox.

The new Honda City turns out to be a lot more comfortable, better to drive, and in addition to this, gets great engine options. In terms of looks as well, the new Honda City gets a modern and elegant design which is definitely more acceptable than its rivals. Moreover, the car is also backed by trusted and proven after-sales support by the brand.

What are your thoughts about the new Honda City October sales figure? Do let us know in the comments box below. You can also join our 91Wheels Auto Enthusiast Telegram group (click via mobile to join) to be a part of interesting automotive discussions. Further, subscribe to our YouTube channel for more such amazing motoring updates.