This Wannabe Range Rover Velar Is A 2020 Modified Hyundai Creta 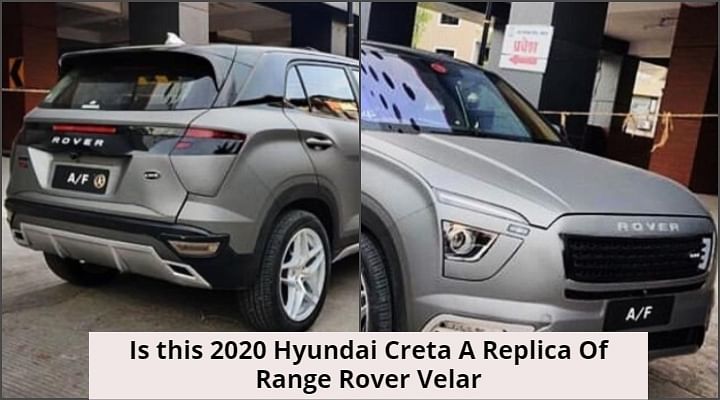 Like promised, we do offer you guys some treat on weekends and this time we have come across a really weird mod and that too one of India's most selling SUV. Yes, this modified Hyundai Creta 2020 model which looks like the Range Rover Velar.

This modified 2020 Hyundai Creta has been wrapped with satin grey and on top of that get some really big wheels. More about that later but let's talk about the rear part first. The middle part of the rear bumper gets glossy black finish and the same glossy black continues to be in the subsection of the tailgate.

This pretty much covers up the taillights too and it kinda resembles like the Range Rover Velar. Don't believe us? Well, the owner is loud about the mod and has Rover badging too at the rear part as well as the front grille. Upon closer look at the bottom right of the rear, the same replica of Land Rover badging is given to resemble its look. The gloss black treatment continues on the ORVMs and the roof and front splitter.

Coming to the front profile now, the car has been de-chromed and now gets a blacked-out treatment. The same can be seen on the front grille. The owner has kept the halogen lights as stock and we wonder, if he has gone this far then why not replace the headlights with the top variant of the Creta.

The side profile gains some good aftermarket alloy wheels finished in the white paint job which are probably 18-inches. Similarly, this white colour can be seen on the front fog lights too. In general, this Creta gets three shades, right? Satin Grey wrap or light green, then white alloy wheels and then black contrast to even out the weirdness. Nonetheless, the owner pretty much loves the car or let's say, he is a big Range Rover fan.

Also Read: 2020 Mahindra Thar vs Isuzu D-Max V-Cross: Which One Should You Buy?

Since the car is brand new, the number is AF else we would be able to fetch some details for you on its engine. Hyundai Creta is available with three engine options - two petrol and one diesel. The 1.5L naturally aspirated petrol makes as much as 113 bhp with a peak torque of 144 Nm. Then comes the most popular 1.5L turbo diesel which makes similar power as the petrol but gets a 250 Nm of peak torque.

The most powerful of the lot is the 1.4L turbo petrol which makes as much as 138 bhp with 242 Nm of torque. Transmission for 1.5L petrol and diesel include a 6-speed manual as standard and an IVT and 6-speed auto respectively. The turbo petrol is only available with a 7-speed DCT gearbox.