TVS Apache RTR 200 vs Bajaj Pulsar N250 Comparison- Which One to Pick? 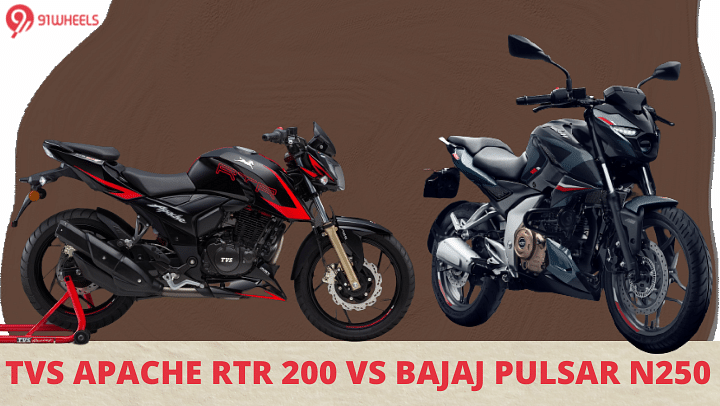 The two-wheeler manufacturers are working hard in the production of a new range of motorcycles launched or yet to be launched in the market. TVS and Bajaj are one of the known manufacturers of two-wheelers and three-wheelers in India. This article will talk about the comparison between TVS Apache 200 and Bajaj Pulsar N250. Bajaj Motors recently launched its biggest Pulsar ever - 250F and N250. Pulsar 250F is a half-faired one whereas the N250 is a naked one. TVS Apache has been in the market for a very long time and has made its own presence in the market. RTR 200 was the first bike in its segment which introduced the concept of ride modes, adjustable suspensions, and smart connected features. Stay Tuned till the end of this TVS Apache RTR 200 vs Bajaj Pulsar 250 comparison for better understanding of the bikes.

Bajaj Pulsar 250F and N250 are already hyped in the market. Today we will talk about the N250  as both bikes come with the same specifications and dimensions. Bajaj has built Pulsar  N250 on a steel tubular frame that is a stress buster and torsionally stiff. It features a flat handlebar that allows the rider to have a relaxed riding position.

Pulsar N250 is the naked motorcycle that gets a futuristic design language and comes equipped with a LED projector unipod headlamp integrated by LED turn indicators that are also used as Daytime Running Lights as well. It comes equipped with a split seat design, muscular fuel tank design, and the newly introduced X-shaped LED taillight design. Suspension duties are handled by 37 mm telescopic suspensions at the front and a new mono-shock suspension at the rear.

It comes with a newly upgraded instrument cluster and also gets an adjoining display that will show a gear shift indicator, alongside a USB mobile charging port it will be neatly tucked in beneath the instrument cluster. The bike is also equipped with a newly designed headlamp unit which makes the bike look more appealing.

TVS Apache RTR 200 is packed by a 197.75cc single-cylinder four-stroke oil-cooled FI engine that is capable of churning out 20.82PS of maximum power with Sports Mode and 17.32PS of maximum power with Urban and Rain mode. At sports mode, the engine can deliver 17.25 Nm of peak torque and 16.51 Nm of peak torque with Urban and Rain mode.

Bajaj Pulsar N250 on the other hand is powered by a single-cylinder four-stroke SOHC two-valve oil-cooled FI 249.07cc engine that is capable of churning out 24.5PS of maximum power and 21.5 Nm of peak torque which is also mated to the same constant mesh, five-speed transmission.

Comparison of the specifications of both the bikes, Bajaj Pulsar N250 is definitely more powerful than RTR 200 as it has a bigger engine. TVS being a 200cc motorcycle still manages to come with three modes and believe me these modes actually perform well. The bike when switched to sports mode becomes aggressive and gives the rider a feel that the bike is ready to fight.

On conducting a comparison of the specifications and features and design of the bikes we got a closer idea on how the bikes look and perform. Now it is time to take  a look at the difference in size of the bikes as in the dimensions.

On conducting a comparison, TVS Apache RTR 200 is lighter from N250 by just 10kgs whereas has a higher ground clearance of 180mm as compared to Bajaj Pulsar N250. Both the bikes are similar in wheelbase dimensions.

The time has come to take the comparison forward to a turning point where you will decide which one best suits your pocket and your needs. TVS Apache RTR 200 comes with a competitive price tag with Pulsar N250 and asks for a premium of Rs 1.33 lakhs (ex-showroom, Delhi) for the Single Channel ABS and Rs 1.38 lakhs (ex-showroom, Delhi) for the 2CH R-Mode.

Bajaj Pulsar N250 is available in a single variant option and asks for a premium of Rs 1.38 lakhs (ex-showroom, Delhi). Bajaj has actually aggressively priced both the Pulsars - 250F and N250 and claims them to be the most expensive one in its series. If seen, the Pulsar in the same price range with a more advanced technology and upgraded features is available in the same price range whereas both the bikes have its own feel and performance. So, the decision not only just depends on the looks and design but also on your need, engine and performance. Before making any decision go for a test ride to clarify your doubts.

So, what are your views on this TVS Apache RTR 200 vs Bajaj Pulsar N250 Comparison? Do let us know through the comments section below. Also, join our 91Wheels Telegram and 91Wheels Whatsapp group to know more about vehicles, conduct discussions on your favourite ride and much more! Also, you can subscribe to our Youtube channel for video content on the latest from the world of cars and motorcycles. Also, connect with us on Facebook, Instagram, and Twitter for more about vehicles! 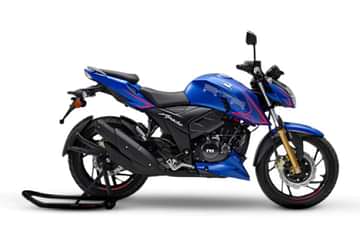