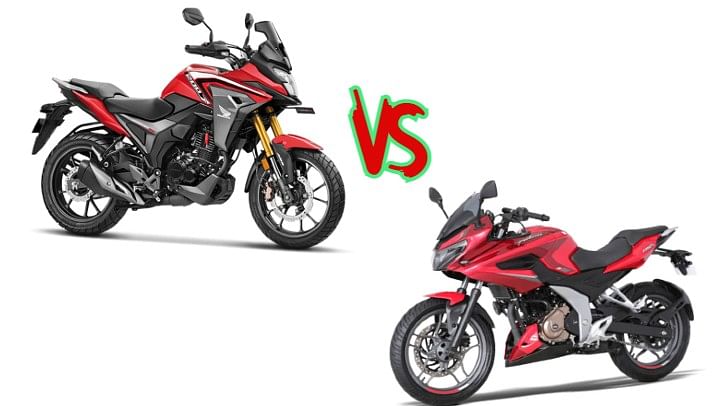 The Pulsar F250 is a brand-new model that seems to be a worthy successor of the Pulsar 220. With prices starting from Rs. 1.40 lakh (ex-showroom, Delhi), it definitely is a proper proposition. Meanwhile, the Honda CB200X is based on its naked counterpart the Hornet 2.0. It gets the same engine and even the same suspension but has ADV elements like the full-LED headlamps, LED turn signal, knuckle-guard cover, and an upswept exhaust. You can say that the CB200X is more about form rather than being a potential hardcore, functional ADV but how do the two motorcycles fair against the Honda CB200X? Lets find that out in our Bajaj Pulsar F250 vs Honda CB200X comparison -

The new Pulsar F250 sits on a new steel tubular frame chassis with increased torsional stiffness and stress resistance. This makes it heavier at 162 kg The body is suspended on a 37 mm telescopic suspension at the front and a mono-shock suspension with Nitrox at the rear.  The handlebars on the F250 are raised and reclined to give it sporty, and yet comfortable ergonomic. The new fairing design looks well-integrated into the body than its previous iteration. The Pulsar F25 definitely looks improved and radical at the same time. The boomerang style headlight unit with the bi-functional LED projector headlamp with position lamp and DRLs gives it a sophisticated and sporty stance.

The Honda CB 200X on the other hand will instantly remind you of the Hornet 2.0. It sits on the same steel frame chassis and it makes the CB200X lighter by 20 kgs than the Pulsar F250. The seat height is also the same as the Hornets 810 mm seat height. The wheelbase remains the same at 1,355 mm and that is wider than the Pulsar F250s. The CB200X has wider handle-to-handle width of 843 mm than the Hornet. It also shares the same headlight and taillight design, and exhaust pipe, from the Hornet 2.0.

Summary: The new Pulsar is definitely improved from last years iteration. But the Honda CB200X ADV credential seeps in with higher ground clearance, lighter kerb weight, and a longer wheelbase. This should give the Honda a slight edge when touring.

The Bajaj Pulsar F250 is powered by an all-new 250 cc engine that produces 24.5 Ps of power and 21.5 Nm of torque. It comes mated to a 5-speed manual transmission, along with a slipper clutch assist. The SOHC, 4 stroke engine available with the F250 has 2 valves and is oil-cooled. With more power comes bigger brakes. The Pulsar F250 gets 300 mm sized front disc brakes, and 230 mm sized rear brakes.

Summary: The Pulsar F250 has a bigger engine, with more power and torque. The Honda does lack in this area, but it feels more refined. On the highway, the F250 will be able to sustain better.

This year, Pulsar has loaded its new-generation Pulsar with quite the gizmos on board. Starting with the new instrument cluster, with a new layout. The blue-lit LCD display looks brighter and better. The rev-meter does feel odd at a time when the whole cluster is digitalized, but it perfectly compliments the new Pulsar. Theres also a USB charging port placed near the tank flap, aside from the assist slipper clutch, and single-channel ABS as features.

But the Honda CB200X is more featured towards the ADV segment. It gets a tall visor, knuckle guards integrated with the Hornets LED indicators, raised handlebars, as its design features. However, the instrument cluster in the CB200X is fully digitalized though, which gets a gear position indicator, digital clock, service due indicator & battery voltmeter, and an engine stop switch engine.

Summary: The F250 is definitely the most featured-rich Pulsar as of yet. The USB charging socket will positively uplift the lifestyle quotient and feasibility of the Pulsar. The Honda CB200X instrument cluster is practical and intuitive, without much sophistication.

The Bajaj Pulsar F250 is definitely feature-rich and is lesser priced than the Honda CB200X. This easily makes it a more sensible proposition. The Honda CB200X 200cc engine stands out for its refinement. It can also do highway runs, and it feels light and easily manageable in traffics. So, the Bajaj sounds good on paper, and with a larger engine and cheaper price tag is a better option.

Also Read: Bajaj Pulsar N250 vs KTM Duke 250 Comparison: Which One to Pick?

What do you think about our Bajaj Pulsar F250 vs Honda CB200X comparison? Let us know in the comment section. You can also join us on our 91Wheels Telegram and 91Wheels Whatsapp group. You can conduct discussions on your favorite ride and much more! Also, you can subscribe to our Youtube channel for video content on the latest from the world of cars and motorcycles. Also, connect with us on Facebook, Instagram, and Twitter for more about vehicles! 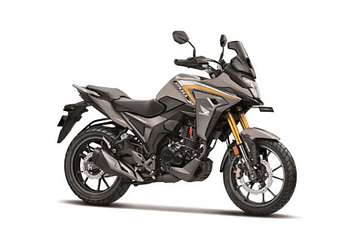