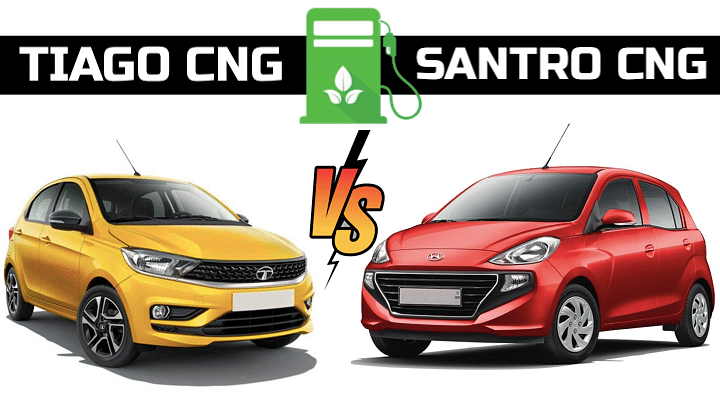 The current-gen CNG version of the Hyundai Santro has better mileage figures. But, with more power and features, can the upcoming Tata Tiago be better?

Tata Motors will launch their first CNG vehicles, the Tiago and Tigor later this month. These two, in their CNG guise will compete in a segment that is dominated by Maruti Suzuki and Hyundai. The former alone accounts for 80% of its sales and the rest 20% is gobbled up by Hyundai, with their CNG vehicles which include the Grand i10, Santro, Aura, and Xcent.

Below we have done a quick spec comparison between the upcoming Tiago CNG and the Santro CNG. Both have the same-sized wheelbase, and both come from their respective petrol variants. However, the Tiago is supposedly going to come with more power, and the added length might also add a few millimeters to its boot space.

Such kind of specific differences has been discussed from here on. But before you proceed, do join our 91Wheels Telegram and 91Wheels Whatsapp group to know more about vehicles, conduct discussions on your favourite ride, and much more!

The Tata Tiago CNG is based on the heavily modified Tata XO platform that used to earlier house the Indica Vista and Bolt hatchbacks. Design-wise, the Tiago CNG features the same front and rear fascia design with no alteration as such. The dimensions are the same too, which makes it bigger than the Santro CNG.

The Tiago CNG measures 45 mm longer, and 32 mm wider than the Hyundai Santro. Although, both the compact hatchbacks have the same 2400 mm long wheelbase, the Tigor CNG version gets a bigger boot space at 242 liters compared to Santros 235 liters.

Speaking of which, this Hyundai sub-compact hatchback is based on the newly designed K1 platform. It was introduced in 2018, and the modified SA is claimed to be 63% rigid than before. This is supposed to make the current-generation Santro sturdier and safe.  Below, we have laid out the key differences in dimensions between the upcoming Tata Tiago CNG and the Hyundai Santro.

Summary: The Tata Tiago CNG is, no doubt, longer and wider than the Hyundai Santro. But the taller profile, makes the Santro ideal for tall people.

The former gets Tatas 1.2-liter Revotron engine that produces 84.48 bhp and 113 Nm of torque. The transmission duties are handled by a 5-speed manual transmission as standard, alongside a front-wheel drivetrain.

The Hyundai Santro, on the other hand, might have more cylinders, but it produces less power and torque. It produces 59.17 bhp and 85.31 Nm of torque, with the same 5-speed manual transmission and front wheel drivetrain.

Summary: Performance-wise, the Tiago CNG is clearly at an advantage over the Santro. But this advantage comes at the cost of mileage figures, where the Santro is more fuel-efficient and has more range compared to the Tiago.

Also Read: Tata Tiago CNG Vs WagonR CNG - Here Is What We Can Expect

Even if we take into count their respective petrol variants, the Tata Tiago is a better purchase than the Santro. Tata has managed to come up with a really good-looking, feature-rich, VFM compact hatchback. The Santro feels quite basic in comparison, especially, when it comes to its appeal factor. But dont take this verdict, as the final pin on the coffin. We are yet to road test both cars, and that will give us a better picture of how both these CNG cars fair in real-world conditions. 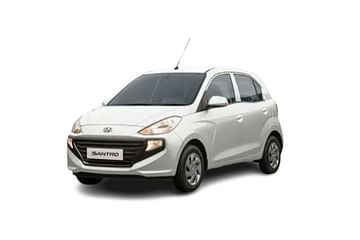