2021 Tata Nexon Spied Again- Is There A DCT Variant In The Works? 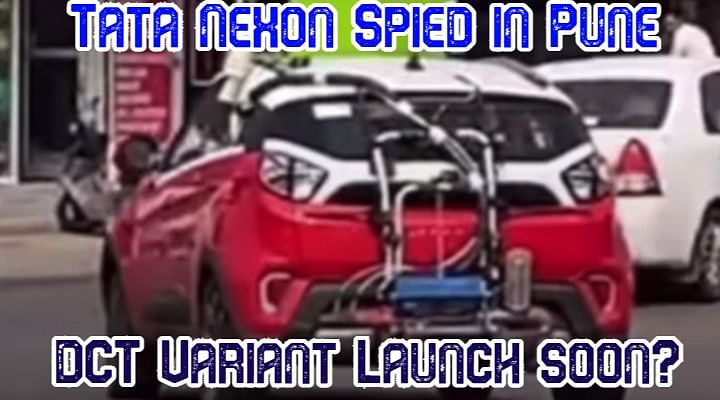 As Tata Motors gets the Altroz DCT ready for the launch, a fresh set of spy shots have emerged from Pune. These spy shots have revealed a Tata Nexon undergoing emissions testing. This is probably the Tata Nexon DCT Variant which is scheduled to be launched next year.

Nexon is one of the most popular subcompact SUVs in India as has been consistent in terms of bringing sales for Tata Motors since its launch in 2017. It also received a facelift earlier this year along with the introduction of an electric-only variant as well.

However launches such as the Kia Sonet and the Hyundai Venue have led the way in terms of the features and powertrain equipment being offered, it becomes important for Tata to update the Nexon to keep it relevant in a segment where competition is increasing day by day.

Currently, the Tata Nexon is being offered with a 1.2 Turbocharged Petrol engine and a 1.5 Turbocharged Diesel engine. The petrol engine puts out 120 PS and 170 Nm while the diesel churns out 110 PS and 260 Nm. Both the engines are currently mated to a 6-speed manual or a 6 speed AMT.

The rumoured Nexon DCT is likely to be the same unit that will be found in the Altroz Turbo DCT variant. The gearbox will be sourced from Punch and the gear shifter will be supplied from Lumax. Component maker Schaeffler will manufacture and supply critical parts for the new gearbox.

It would be fair to assume the Tata Nexon DCT variant would be limited mainly to the top-spec trims of the car to avoid the problem of sticker shock. AMT variants will continue to be offered to the customers who are looking to buy the lower variants.

The Tata Nexon DCT is expected to go up against the Kia Sonet DCT and the Hyundai Venue DCT when it hits the market. Here is an overview of their specs.

The DCT is expected to make the Tata Nexon peppier than before. In terms of performance on paper, the DCT will bring the Nexon on par with the Venue and the Sonet when launched. Since it would be a wet clutch unit, the gearbox will also be suitable for Indian conditions and will be less prone to issues.

Expect the prices of the Tata Nexon DCT variant to carry a significant premium over the current prices. Current ex-showroom prices are in the range of 9 6.99 Lakh and 9 12.70 Lakh.

Join our 91Wheels Auto Enthusiast Telegram group (click via mobile to join) curated exclusively for the fans, enthusiasts and the owners. Further, do subscribe to our YouTube channel for more such amazing motoring updates.