2022 Royal Enfield Himalayan 450 adventure motorcycle is spied testing yet again with a new variant that can be a scrambler version of the bike.

We already know that the cult motorcycle manufacturer Royal Enfield is on an expansion spree. With new products launching periodically, the lineup expansion plan keeps on getting extensive. Being already caught in action, are the again spied test mules of the upcoming bikes from the company. While the 2022 Royal Enfield Himalayan 450 is far from its debut; the new spy shots leave us wondering with newly emerged details.

From rumors to reality, the new iteration of the adventure-tourer Himalayan is already under development. The previously spotted test mules have already left us with ample signs showcasing a completely new design. To add to this fact, the new spy shots are nonetheless more revealing.

The launch of Royal Enfield Scram 411 is already indicating towards the new Himalayan. There are already rumors regarding the production end coming near the existing Himalayan. So, the recent spy shots help us understand what the new bike could look like.

For starters, the design is completely new; although, it does resemble the current-gen bike. It is based on a new & bigger chassis, the outlook is bigger and we expect dimensional changes as well. As one can notice in the photos, it uses a bigger twin-split seat setup, a large fuel tank (maybe for increased riding range), and a spoked rim set up as well. The instrument panel is also going to be partially digital while it will support Bluetooth connectivity, rider-assist display functions, and even turn-by-turn navigation.

The mechanicals will also be new as they will feature a bigger engine which may produce power in the likes of 40 hp at max. There is no information regarding the mechanical changes, but, the reworked swingarm and riding posture testifies to this assumption. Also, the new bike is liquid-cooled as clarified through the spy shots.

Speaking of the riding posture, the wide handlebar seems upright set, and the rider footpegs are also rear-set. This could mean a slightly more dedicated posture as compared to the current Himalayan. While the posture might be engaging; to keep it touring friendly there will be pannier plates and supports around the frame. In the spy shots, the test bike seems to be fitted with the top box mount and pannier mounts. This makes the tail section upright set and looks more butch in appeal.

Surprisingly out of nowhere, it seems there is also sibling underdevelopment of the new Himalayan. The second bike spotted was more like a Scram version. This might be possible as RE is experimenting with this on its 350cc lineup as well. Royal Enfield Hunter 350 is also under making which will be a more Scram design of the new Royal Enfield Meteor 350.

The spied bike looked to be based on the same chassis as the new Himalayan, but, it was completely different in design. More naked, more aggressive riding posture, alloy wheels, and shorter tail section contribute to the assumption of this being a new Scram 450. Again, no data concretes this anticipation but the craze for new niches in the Indian market might push the company to introduce a Scram version also.

Mechanically, we do not expect any major differences as it will be based on the adventure version. But, due to the different design appeal, feature changes will attract new young buyers and Scram lovers.

Well, there are a lot of new bikes that Royal Enfield is currently working over. There include the 350 cc footprint as well as the new 650 cc footprint. On one hand, products like the Hunter 350 will capture the low-capacity engine segment; while the Shotgun 650, Bobber 650, & Himalayan 450 will help capture the high-capacity engine segment in the upcoming time. We anticipate that the new Himalayan will debut around the EICMA 2022 that is destined to take place in Milan, Italy.

Tell us by commenting down below your thoughts on the new Scram 450 and Himalayan 450. 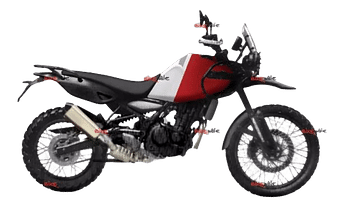 Himalayan 450 is a Cruiser bike from Royal Enfield. Royal Enfield is expected to be launched at a price of Rs. ₹ 2.60 Lakh - ₹ 2.70 Lakh in Indian automobile market.