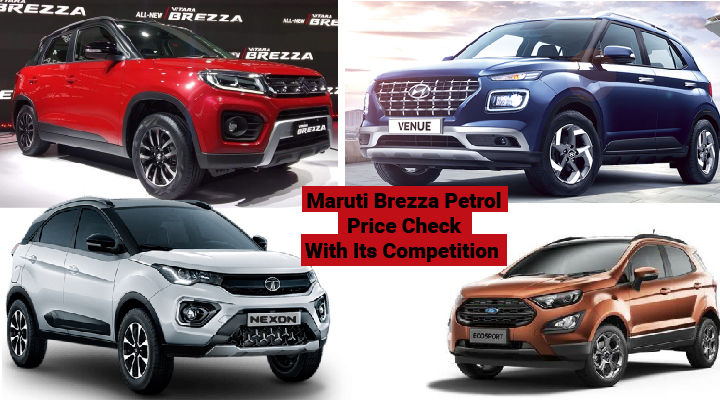 After the much wait, Maruti successfully brought in the petrol-powered Brezza in the Indian markets. And the price for the same starts at Rs 7.34 lakh. Now that the Maruti Brezza petrol is available, it has a fair amount of competition with its rivals.

In this article, we compare the recently launched Maruti Brezza Petrol vs Hyundai Venue vs Tata Nexon vs Ford Ecosport price. All of these cars equate to a fair amount of sales in the Indian market and let's see how these stand against each other in terms of pricing.

Maruti Suzuki has played the pricing game strongly as the petrol base model is Rs 30,000 lesser than the axed diesel engine. Also, the Brezza now comes with the inclusion of an automatic transmission for petrol from the launch.

With the diesel engine, the Brezza used an AGS gearbox but for petrol, it uses a much-advanced torque converter unit which is also seen in the Ciaz and XL6. The automatic unit starts from Rs 9.75 lakh and the top model fetches till Rs 11.4 lakh (ex-showroom, Delhi). This gearbox also uses Maruti's SHVS, mild hybrid technology which helps in increasing fuel economy. The ARAI certified fuel economy for the automatic sticks to 18.76 km/l while that of manual stays at 17.03 km/l.

Sharing more details on the power output of the 2020 Maruti Brezza petrol then it comes with a 1.5-litre K15B petrol engine which is also used in Ciaz, XL6 and Ertiga. This makes a 105 bhp on tap along with a peak torque of 138 Nm. The engine gets mated to either a 5-speed manual gearbox or a four-speed torque converter.

The new Brezza also comes with updated exteriors and interiors and inclusion to the features list. It also receives a larger 17.78 cm touchscreen infotainment system which comes with connectivity features like Apple CarPlay and Android Auto. It also provides live traffic navigation, vehicle alerts and among others.