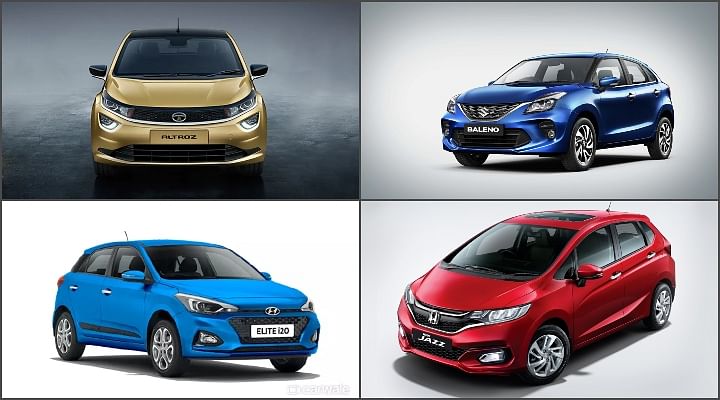 Premium hatchbacks are the second big thing after the compact SUVs which in demand right now in the Indian market. We have seen several examples of Maruti Baleno and Hyundai Elite i20 heading neck to neck in terms of sales. Here, we will be sharing with you what are the sales figure of the premium hatchbacks and how each manufacturer has contributed to their part.

Before we go any further, make sure you are a member of our exclusive 91Wheels Whatsapp group where we share details of the Indian automotive industry and bring to you latest news.

The Baleno tops the list in the sales figure of premium hatchback department. It is only sold with a petrol engine and offers the best in class space on the inside. Maruti has managed about 19,433 units for last month. Even with the current situations, Maruti Baleno has got 70% more sales when compared with the same month for last year.

We all know that the new i20 is in for a generation change which is expected to launch in the festive season. The premium hatchback recorded total sales of 9852 units for last month and the annual overall sales are marginally down by just 3%. Like the Baleno, the BS6 i20 too is offered with a 1.2L petrol engine. However, with the new one in the upcoming, we will see several engine options and it will be feature loaded.

It is good to see the Indian carmaker securing top 3 spots in the premium hatchback sales. Tata has been climbing up the latter with a motto - Safety First. The Altroz is the only hatchback in the segment to come with Global NCAP safety rating of 5 stars. The hatchback was launched earlier this year and has recorded a total sales of 5592 for the last months. Also, it gets two engine options - a 1.2L petrol and 1.5L diesel. Tata also plans to introduce a turbo petrol engine soon.

Toyota's share in the premium hatchback segment is all because of the Glanza that is the rebadged Baleno. Same styling, features and even the powertrain options. The only thing with the Glanza is more warranty and it is cheaper by a few thousand bucks than Baleno. Toyota recorded total sales of 2572 units for last month.

With the BS6 version, Honda has managed to sell about 748 units of Jazz for last month when compared to 649 for the same month in last year. The overall growth accounts for 15% and it is the most expensive premium hatchback on sale right now. It is only available with a 1.2L naturally aspirated petrol engine right now.