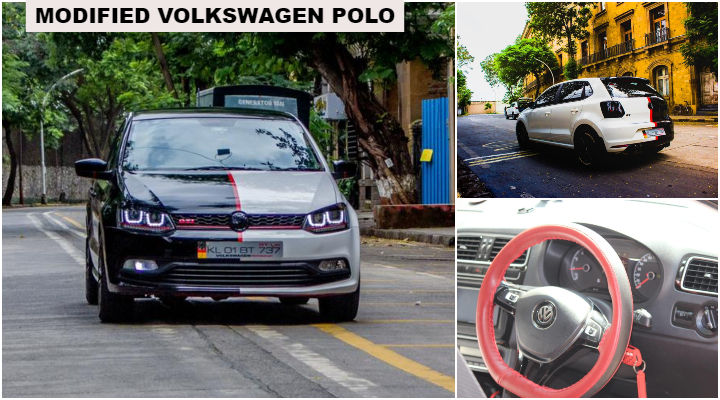 Volkswagen Polo GT has been a preferred choice of modifiers in India and we have shared a lot of cool examples of the same. This two-face modified Volkswagen Polo GT here is loaded with a ton of modifications and looks absolutely rad, to say the least. The owner of the car has changed the colour from red to a spanking two-face theme. Let's see what this car has got!

The front of the car gets Eagle eye projector headlamps with DRLs and a new WRC bumper which doesn't house the fog lights anymore. The grille has been replaced by the R-line honeycomb mesh and some aftermarket police lights are also added. One side of the car is completely black and the other side is completely white whereas both are seperated by a red stripe.

The rear of the car gets smoked-out LED taillights and dual exhaust pipes. Behind the pipes is the Borla spit fire exhaust system which actually spits flames. The interior of the car is close to stock, the changes are aftermarket touchscreen infotainment unit from Pioneer and custom 3D mats. Sony Xplode bass box and Chicago series amplifier have also been added for extra thump. Now let's talk about the heart of the matter and some serious mods. After all, it's not just a ricer! Share your opinion on this Polo GT in our VW Whatsapp Group (click via mobile to join)

This is the Polo GT TSI with a 1.2-litre four-pot turbo-petrol engine and it has got some serious mods to talk about. The first one is the Superchips Stage 2 ECU remap and DSG remap. Moreover, the car has got Bilstein B14 Coilovers, BMC air filter, Forge BOV (Blow Off Valve), Forge 3mm spacers and DBA Rotors with EBC Brake Pads. This modified Polo GT runs on blacked-out alloy wheels shod with Yokohama S Drive 205/55/R15 rubber.

All these mods make this car an absolute bomb and thanks to its two-face colour and chrome delete, it is an eyeballs magnet. We don't have the power figures after all these mods but it must have got some increase in outright power and surge of torque.

This Polo GT TSI just doesn't look fast but it is really fast. You ask how? Well, this right here is the winner of The Valley Run 2019 in the A4 category. With a quarter-mile time of 16.57 seconds, it can leave all the so-called hot hatches eating dust on the drag strip while this panda shrieking on the drag strip.

What do you think about this mod? Tell us in the comments below!