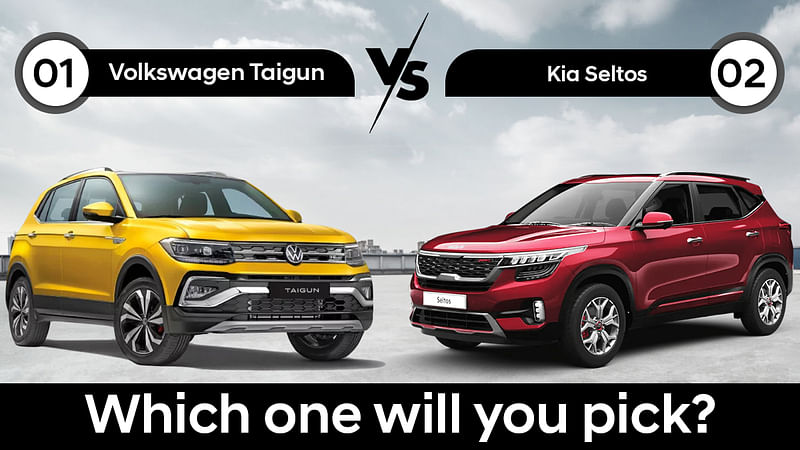 VW Taigun will only be launched in two petrol engines and this is the reason why we have let go off the diesel engine of the Kia Seltos. Mechanically, it is the VW Taigun that is more powerful on paper as the 1.0L TSI generates 114 bhp/178 Nm while the bigger 1.5L TSI makes 148 bhp/242 Nm of peak torque. A 6-speed manual is observed as standard for both the TSI units while the 1.0L gets an optional 6-speed AT while the 1.5L TSI is equipped with an optional 7-speed DSG.

Kia Seltos comes with a 1.5L naturally aspirated unit and a 1.4L turbocharged petrol. The latter generates as much as 138 bhp with 242 Nm of peak torque and while the humble 1.5L NA petrol kicks out just 113 bhp with 144 Nm of peak torque. Both these engines are paired with a 6-speed MT unit as standard while the 1.5L gets IVT as an option and similarly, the 1.4L turbo petrol gets a 7-speed DCT as an option.

The official dimensions of the VW Taigun are not yet out and since it shares the same platform as the Skoda Kushaq, we've filled the gap with similar figures. Kia Seltos is 94 mm longer, 40 mm wider and 33 mm taller than Skoda Kushaq. Even the ground clearance and boot space of Kia Seltos is larger and sticks to 190 mm and 433 litres respectively. It is the wheelbase of the VW Taigun that sticks to 2651 mm which is the largest in the segment.

VW Taigun packs in a newer design and carries a lot of chrome treatment that is loved by the Indian market. At the front, the upper part of the grille houses the VW badge finished in chrome and the chrome underlining. The fog light housing is surrounded by a thick chrome element that looks a tad bit more. The LED projector headlights with LED daytime running lights and faux skid plates really complete the overall look of the SUV.

The side profile is loaded with 17-inch alloy wheels with dual-tone alloys along with wheel arch cladding that gives a stronger persona of the Taigun. Like the front, the rear too gets a thick chrome treatment that now surrounds the reflector and the faux skid plate gives a sporty character to the SUV.

On the other hand, it is the Kia Seltos that still remains to attract a lot of attention even though the SUV is 2 years old. The tiger-nose grille with LED treatment really brings a character to the SUV. In addition, the LED treatment is observed for the headlights DRLs and taillights. It is the GT line variant that gets red treatment on the brake callipers, grille, alloy wheels and faux skid plates. Overall, it is the Kia Seltos that carries a dominating stance than the VW Taigun.

Here, we have included the features that one SUV has over another. As of now, the official features of the VW Taigun are not yet out but we expect it to be similar to that found in the Skoda Kushaq. Here, Kia Seltos has an edge over VW Taigun as it comes with front parking sensors, a powered driver's seat, a sunglass holder and a 360-degree camera that really helps parking in tight spaces.

We expect that the top-spec variants with automatic transmissions of the VW Taigun will get 6 airbags. Kia Seltos excels by providing a tyre pressure monitoring system whereas the Kushaq brings back the points by providing child seat anchor points that the Seltos misses out on. Also, Kia Seltos gets a 3-star crash rating at the Global NCAP while the reports of the Skoda Kushaq are not yet out.

We believe that, unlike the Skoda Kushaq, the upcoming VW Taigun will surely undercut the prices of Kia Seltos and Hyundai Creta by a small margin. We expect the price to stick from Rs 9.90 lakh to Rs 17.40 lakh, ex-showroom, Delhi.

This is where the Taigun shines as it is expected to offer 4 years or 1 lakh km extended warranty whereas Kia only provides 3 years of warranty on the Seltos. Do note that the official standard warranty of Taigun is not yet out and we took a hint from Skoda Kushaq only.

So this was our VW Taigun vs Kia Seltos comparison for you. Do tell us in the comment section as to which of these SUVs is your pick and why? Also, make sure you are a member of our 91Wheels Whatsapp group and 91Wheels Telegram group. Here, we bring you all the latest updates related to the Indian Automotive Industry.

Do subscribe to our 91Wheels YouTube Channel to check out the latest reviews, performance runs, mileage tests, comparisons and more 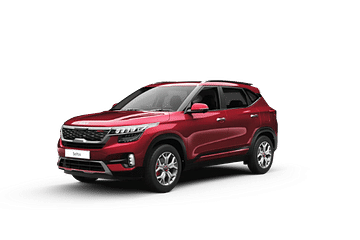