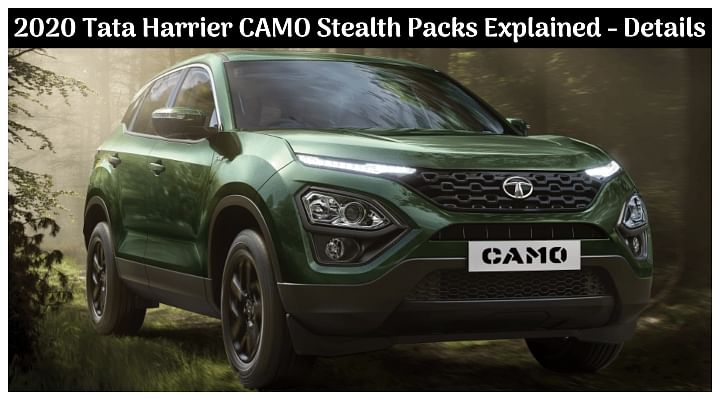 Tata Harrier is a very popular SUV in the Indian market. The Harrier was first launched in India in January 2019. The company also launched a new updated version of the Harrier in February this year at the 2020 Auto Expo. Tata Motors launched the Harrier DARK Edition in September 2019 and it looked just wow! Buoyed by the immense popularity of the Harrier DARK Edition, the company has now launched the Harrier CAMO Edition. The new 2020 Tata Harrier BS6 CAMO Edition gets two Stealth packs and in this article, we have explained the contents of these Stealth packs and their prices for you.

First of all, talking about the aesthetic appeal of the SUV, so the new Harrier CAMO Edition looks extremely charming. It gets an Olive Green paint job which Tata likes to call Majestic Camo Green colour shade. It gets multiple badges on the body panels, new body graphics and 17-inch Blackstone alloy wheels. On the inside, the Harrier CAMO Edition gets a Blackstone Matrix dashboard and Gunmetal Grey interiors. It also gets premium Benecke-Kaliko Blackstone leather seats with contrast CAMO Green stitching. All in all, the new Harrier CAMO Edition looks really good both from the outside as well as on the inside. It will have a great road presence too owing to its unique paint scheme and Harrier's sheer dimensions.

Now, talking about its Stealth packs. So, the new Harrier CAMO Edition gets two accessory packs. They are Stealth and Stealth+. The new Stealth pack is priced at Rs. 26,999 while the Stealth+ accessory pack is priced at Rs. 49,999. Then, in the above-embedded video, you can see that Tata Motors has also released an official video on its YouTube channel that reveals the details of these Stealth pack accessories. So, below we have explained these Stealth packs and the official accessories of the new 2020 Tata Harrier BS6 CAMO:

Mechanically, the new Harrier CAMO Edition is completely identical to the other variants of the Harrier. The new 2020 Tata Harrier is powered by a BS6-compliant 2.0-litre turbocharged diesel engine. This diesel motor churns out 170 PS of maximum power and a whopping 350 Nm of peak torque. The oil-burner comes mated to a 6-speed manual gearbox and a 6-speed torque converter automatic transmission. It gets a ton of features too. The lower variants of the Harrier CAMO gets a 7.0-inch touchscreen while its top variants get an 8.8-inch touchscreen infotainment system with Android Auto and Apple CarPlay connectivity and many other features.

What are your thoughts on the new 2020 Tata Harrier BS6 CAMO Edition? Also, between the new Harrier CAMO Edition and the Tata Harrier DARK Edition, which one will be your pick? Do share your opinions with us in the comments section below. You can also join our 91Wheels Auto Enthusiast Telegram group (click via mobile to join) curated exclusively for the fans, enthusiasts and the owners. Further, subscribe to our YouTube channel for more such amazing motoring updates. 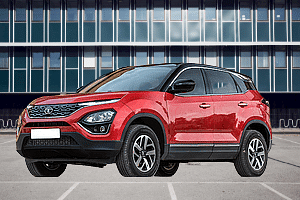