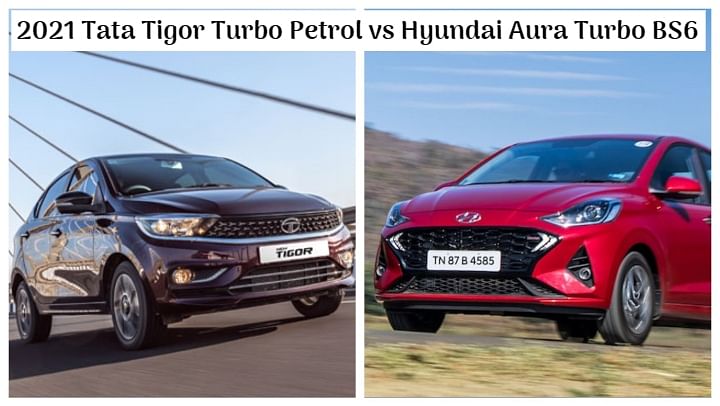 We have a lot of sub-4-metre compact sedans currently on sale in India ranging from the Maruti Suzuki Dzire to the Honda Amaze, Ford Aspire, Tata Tigor, etc. All these sedans get good powertrain options. However, in recent times, we have seen that people have started loving turbocharged petrol engines, which all these sedans don't offer. Currently, Hyundai Aura is the only sub-compact sedan in India to get a turbocharged petrol engine. But soon, we will be having one more sedan in this segment with a turbo petrol mill and it is the Tata Tigor. The Tata Tigor Turbo was recently spied on test in India. So, today we have for you a specification-based comparison of the upcoming 2021 Tata Tigor Turbo Petrol vs Hyundai Aura Turbo BS6.

The main highlight of these sub-compact sedans will be their powerplant. The upcoming Tata Tigor Turbo will most likely share its powerplant with the soon to be launched Altroz Turbo. This means it will be powered by a BS6-compliant 1.2-litre turbocharged Revotron petrol engine. This is the same turbo petrol motor that we also get in the Tata Nexon sub-compact SUV but in a different (higher) state of tune. This turbo petrol motor in the Tata Tigor will churn out around 110 PS of maximum power at 5500 RPM and 140 Nm of peak torque between 1500-5500 RPM. The engine will come mated to a five-speed manual gearbox only. While the fuel-efficiency figure isn't revealed/leaked yet, we believe it will be somewhere around 20 kmpl.

Now, talking about the new 2020 Hyundai Aura Turbo, it gets the same 1.0-litre turbocharged petrol engine that we also get in a slew of other Kia and Hyundai cars but in two different states of tune. The Hyundai Verna, Venue and Kia Sonet get the 120 PS tune while the Grand i10 Nios and Aura get the 100 PS tune. This means the Aura is powered by a BS6-compliant 1.0-litre, three-cylinder, turbocharged petrol engine. This petrol motor churns out 100 PS of maximum power at 6000 RPM and 172 Nm of peak torque at 1500-4000 RPM. The engine comes mated to a five-speed manual gearbox only. Its ARAI-claimed fuel economy figure is rated at an impressive 20.5 kmpl.

So, if we compare the speculated on-paper specs of the upcoming Tata Tigor Turbo with the current Hyundai Aura Turbo, the Tigor Turbo Petrol has a clear edge in terms of power output while the Aura Turbo is way ahead in the torque output figures. However, how does the Tigor Turbo performs in real-world driving conditions, this we can say only once we get to drive it in the near future. The other aspects of both these cars remain more or less the same to their non-turbo counterparts. The Hyundai Aura Turbo gets sporty black touches and red accents inside and out and the same we are expecting to see on the new upcoming Tata Tigor Turbo too. Both these sub-compact sedans are very feature-loaded but it is the Hyundai which gets more goodies. Now, let's a look at their dimensions and capacities too:

The Hyundai Aura Turbo is available in only one variant called SX+ and is priced at Rs. 8.60 lakhs while the other variants of the Aura BS6 are priced between Rs. 5.85 lakhs - Rs. 9.28 lakhs. The new BS6-compliant 2020 Tata Tigor Facelift, on the other hand, is currently priced between Rs. 5.39 lakhs - Rs. 7.49 lakhs. The upcoming top-spec turbo petrol variant of the Tata Tigor is expected to be priced at Rs. 7.99 lakhs. All prices stick to Ex-showroom Delhi. The upcoming Tata Tigor Turbo Petrol is expected to be launched in India by mid-2021.

So, this was our specification-based comparison of the upcoming new 2021 Tata Tigor Turbo Petrol vs the Hyundai Aura Turbo Petrol BS6. What are your thoughts on the upcoming Tigor Turbo and between these two sub-compact sedans, which will be your personal pick? Feel free to share your opinions with us in the comments section below. You can also join our 91Wheels Auto Enthusiast Telegram group (click via mobile to join) curated exclusively for the fans, enthusiasts and the owners. Further, subscribe to our YouTube channel for more such amazing motoring updates.