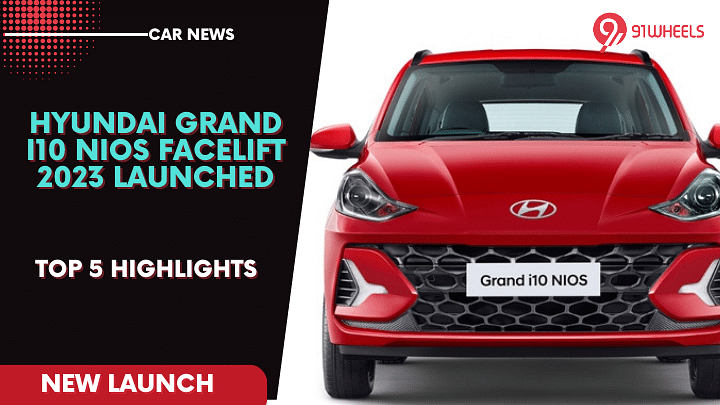 After showcasing a range of EVs at the Auto Expo 2023, Hyundai has set the ball rolling for some concrete launches as well for the year 2023. The Hyundai Grand i10 NIOS Facelift 2023 has been unwrapped with some exciting new changes and some carried forward from the outgoing version. This update will spark up the sales figure and the likes of Maruti Suzuki Swift and Tata Tiago will have a revamped competitor. What's different this time on the Grand i10 NIOS and what's the same? Let us uncover.

The facelift version gets a bigger bold, black grille at the front and a revised bumper with large air-intakes, when compared to the outgoing version, which adds to the design statement of the i10 NIOS.

The rear is now equipped with tail lights connected by an LED strip which is now getting common in the modern car design language. Overall, there are some fresh visual elements.

The most exciting upgrades in the Hyundai Grand i10 NIOS 2023 facelift are however on the inside. It sports some of the Segment-First features on offer. Now, you get a Wireless charging pad, Cruise control, USB Type-C fast charging and a TPMS as well. These inclusions will definitely ruffle some feathers of the rivals, as featuring these loadings on a car in this segment is a bold and exciting move.

With the new 2023 Grand i10 NIOS, Hyundai has leveled up the game with extra safety features. Now, it includes 4 airbags with ABS and EBD as standard across all variants, which is a very welcome addition in terms of safety. Additionally, the top trim gets a 6-airbag set-up as well. This shows that Hyundai is ready to make safety a priority in this segment as well.

Mechanically, there is no updation. The engine remains the same 1.2-liter kappa petrol mated to a 5-speed MT and 6-speed AMT transmission that churns out 83 PS power and 113 Nm of torque. There is no diesel option on offer on this one.

5. No Turbo For Now, But CNG Option Is Available

Hyundai with the new Grand i10 NIOS has discontinued the 1.0-liter turbo petrol engine, as of now. It only gets a petrol unit. The interesting feature is the factory-fitted CNG kit as an option with the facelifted Grand i10 NIOS. The CNG-powered unit delivers a power of 69 PS with 95 Nm of torque. Mileage seeking population will find a sweet spot with this inclusion.

VERDICT - The new 2023 Hyundai Grand i10 NIOS facelift definitely punches above its weight with a lot of features making their debut in this segment with the facelifted vehicle. With improved safety standards, increased tech quotient, and a factory-fitted CNG kit, Hyundai is seriously looking to capture a bigger market share over its rivals. Will this be a threat to the Maruti Suzuki Swift? Do tell us your views. 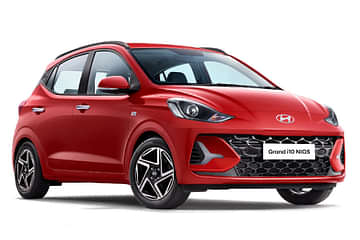