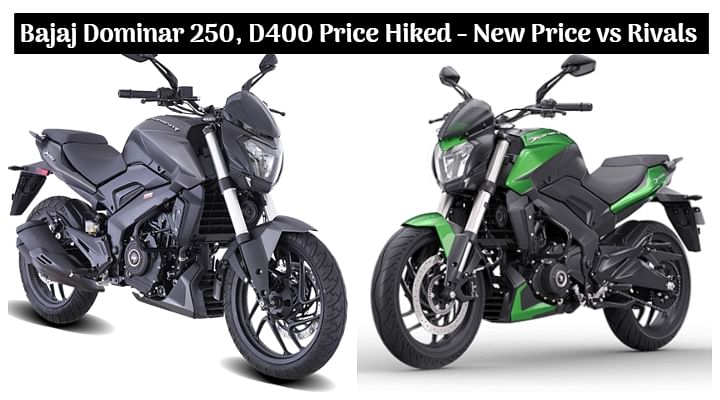 As you all might already be knowing that Bajaj keeps increasing the prices of its motorcycles every now and then. The Dominar range and the Pulsar range, for instance, have got multiple price hikes within a year. With the onset of a fresh new year, the price of all the Bajaj Pulsar motorcycles, except the Pulsar RS 200 has been once again increased in India. To read about the latest prices of the Bajaj Pulsar motorcycles, you can click HERE. Now, talking about the Dominar series, so the new Bajaj Dominar 250 was launched in India in March 2020 at Rs. 1.60 lakhs, Ex-showroom Delhi and within just ten months of its launch, its price has soared up significantly. As the company has now hiked the price of the Bajaj Dominar range, here we have their latest prices and also a quick price comparison with their rivals:

The ARAI-claimed fuel-efficiency of the new Bajaj Dominar 250 BS6 is rated at 35 kmpl while the ARAI-claimed fuel-efficiency of the Dominar 400 BS6 is 29 kmpl. Both these motorcycles share cycle parts with each other and they get almost similar hardware components and features. At present, the Bajaj Dominar 400 is around 32,000 rupees dearer than its younger quarter-litre sibling, the Dominar 250. So, between the new Bajaj Dominar 250 and the Dominar 400, which one will be your personal pick? Do feel free to share your thoughts and opinions with all of us in the comments section below. You can also join our 91Wheels Auto Enthusiast Telegram group (click via mobile to join) curated exclusively for the fans, enthusiasts and the owners. Further, subscribe to our YouTube channel for more such amazing motoring updates.