Toyota Fortuner is one of the most loved SUVs of recent times. The Fortuner was first launched in India in the year 2009 and since then the SUV has had a cult following in the Indian market. The Fortuner has been the best-selling premium SUV in India for more than a decade but in terms of equipment on offer, it has started looking basic in front of the competition. Fret not, the Japanese carmaker is soon going to launch the 2020 Toyota Fortuner Limited Edition in India.

The Toyota Fortuner Limited Edition model will be a bit more feature-loaded than the standard Fortuner. The limited-edition iteration of the SUV is expected to be after the fashion of the Innova Crysta Leadership Edition that was launched recently in the market. It is expected to get a slew of cosmetic updates inside and out along with the inclusion of some new features like a 360-degree parking camera and auto-folding outside rear-view mirrors (ORVMs).

The standard Fortuner is powered by a BS6 compliant 2.8-litre diesel engine churning out 177 bhp and 420 Nm of peak torque mated to a 6-speed manual gearbox. It also gets a 6-speed automatic transmission with paddle-shifters that produces an additional 30 Nm of torque. The oil-burner powered Fortuner is available in both 2-wheel drive and 4-wheel drive configurations. It also gets a 2.7-litre petrol engine which gets only 2-wheel drive layout and produces 166 bhp with 245 Nm of torque, mated to a 5-speed manual or a 6-speed automatic transmission. The Limited Edition of the Fortuner is expected to be available only with the oil-burner powerplant.

The Toyota Fortuner Limited Edition model will be launched really soon in India. Commenting on the same, Naveen Soni, Senior Vice President, Sales and Service, Toyota Kirloskar Motor, stated to AutoCar India, "Coming very soon is a limited-edition version of the Toyota Fortuner." The prices of the current Fortuner range between Rs. 28.18 lakhs - Rs. 33.95 lakhs, Ex-showroom and it is expected that the Limited Edition Fortuner will be priced slightly premium over the standard SUV. 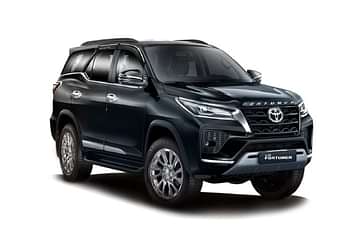