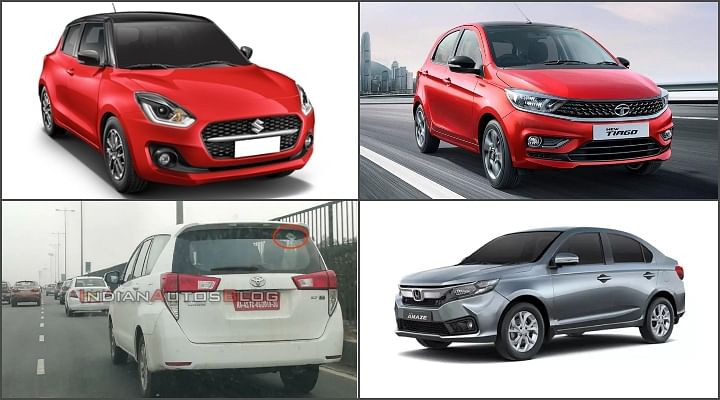 The fuel prices in India are touching an all-time high as it has crossed Rs 100 mark in some cities. So to overcome the rising fuel cost,s some carmakers have switched to alternative fuel types such as CNG. CNG serves your purpose right as it is pocket friendly and does not make you worry about the rising fuel costs. In this article, we share the top 10 upcoming CNG cars in India that will launch soon. Let's have a look!

The ever-popular compact sedan, Dzire is only available with a 1.2L DualJet petrol motor. It is one of the most fuel-efficient petrol sedans delivering 23.26 kmpl in manual and 24.12 kmpl in AMT. This engine is the same that is sourced from Baleno and now generates 89 bhp with 113 Nm of peak torque.

With the inclusion of CNG, the power figures will take a 10% dip and the cost will be higher by an expected margin of Rs 60,000 over its petrol counterparts. We believe that Maruti will bring the Dzire CNG with the VXI variant first.

Next, on our list of upcoming CNG cars in India, is the close relative of the Dzire, the Swift. Maruti updated the Swift early this year with several design updates and features. The biggest change was the inclusion of a 1.2L DualJet petrol motor that is the same as Dzire. Now, reports suggest that the carmaker might bring in a CNG option to the Swift that will surely cut down the costs for people travelling long distances.

The power figures might be dropped to 79 bhp and 102 Nm of peak torque but it will surely bring in a greater fuel economy. Also, once launched, the Swift CNG will target the likes of the Hyundai Grand i10 Nios CNG.

The newer model of Celerio will be launched somewhere around the festive season and just like the older version we believe that the hatchback will receive a CNG as an alternative fuel option. The 1.0L engine makes 67 bhp with 90 Nm of peak torque in petrol whereas the power figures in CNG sticks to 58 bhp/78 Nm.

The second best selling sedan from the Japanese carmaker, Amaze is number four on the list for getting CNG as an option. It will use the existing 1.2-litre, four-cylinder naturally aspirated petrol engine that churns out 89 bhp with 110 Nm of peak torque. A 5-speed manual will come as standard. The petrol does get a CVT unit too. In other news, Honda is gearing up for the launch of the Amaze facelift and the new edition will be an electric sunroof that is first in its segment.

This entry-level hatchback from Tata Motors is the only car in its segment to get a Global NCAP rating of 4 stars. Now, Tata is all set to roll out the CNG version for the same and it will rival the likes of Maruti Swift and Hyundai Grand i10 Nios. In other news, Tata is also gearing up for the launch of Tiago NRG in the first week of August.

The extended version of the Tiago offering additional boot space and features will too get CNG as an alternative fuel. Once launched, Tigor CNG will rival Honda Amaze, Maruti Dzire and Hyundai Aura. We expect the price of CNG variants will sit at a premium of Rs 60,000 when compared with its manual counterpart.

The Aspire was available in CNG back in 2019, however, with the introduction of newer BS6 norms, this variant got discontinued. Ford is likely to introduce a CNG version with the Aspire that will be powered by the 1.2L petrol engine. This unit generates 85 bhp with 119 Nm of peak torque. In other news, Ford is gearing up for the Ecosport Facelift that will be launched near the festive season.

Update - While Zac Hollis, Director, Sales and Marketing, Skoda India had earlier revealed that the Rapid would get a CNG variant, he has now Tweeted that this variant won't ever make it to the market. Click here for details.

Skoda has commented that they are working on the CNG version of the Rapid, however, they will only launch this version if there's wide connectivity of CNG pumps throughout the country. The Rapid is powered by a 1.0L TSI engine that generates as much as 109 hp with 178 Nm of peak torque. The price of Skoda Rapid starts from Rs 7.80 lakh to Rs 13.30 lakh, ex-showroom, Delhi.

Next, on our list of Upcoming CNG cars in India is a sub-compact SUV that has established itself really well in the market. Just recently, a spy shot confirmed that Tata is testing CNG on the Nexon. If that happens then not only Nexon will be one of the most affordable compact SUVs in the segment but also the first to come with factory fitted CNG. It will be powered by the same 1.2-litre, turbocharged petrol engine that generates 118 bhp with 170 Nm of peak torque but the power figures will decrease for the CNG equipped Nexon. The price of Tata Nexon petrol starts from Rs 7.20 lakh to Rs 11.91 lakh, ex-showroom, Delhi.

Toyota is testing out the Crysta CNG and several spy shots for the same has been seen on the internet. The Crysta CNG would be a huge relief for the commercial fleet as it will bring down the running costs by a good margin. Also, to the private buyers who are not looking for diesel Innova, this CNG version might save them a lot of money.

Under the hood, the Crysta CNG will use the 2.7-litre, naturally aspirated, four-cylinder petrol engine. This unit churns out 164 bhp with 245 Nm of peak torque. We believe that the power figures will take a hit by 10% and the CNG will be reserved for the lower-spec variants only.

So from these 10 Upcoming CNG cars in India, which one will be your pick? Do let us know in the comment section below. Also, make sure you are a member of our 91Wheels Whatsapp group and 91Wheels Telegram group where we bring you all the latest information related to the Indian Automotive Industry.

Do subscribe to our 91Wheels YouTube Channel where we bring you all the latest reviews, performance runs, mileage tests and comparisons.