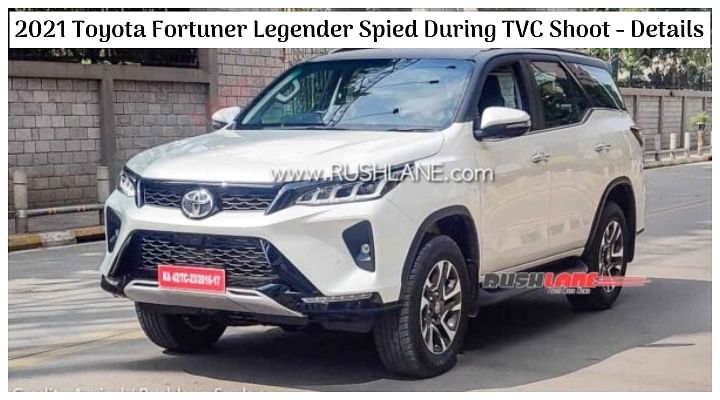 Just a few days ago, we reported to you that Toyota will launch the all-new 2021 Toyota Fortuner Legender in India very soon and now this full-size SUV has been recently spied in the country. The new 2021 Toyota Fortuner Legender has been recently spied during the shoot of a TV commercial Ad in Bengaluru, Karnataka. Toyota is launching back to back new cars in the Indian market. Just a few months ago, the carmaker launched the Toyota Urban Cruiser sub-compact SUV which is essentially a re-badged Maruti Suzuki Vitara Brezza. Then very recently, the company launched the new Toyota Innova Crysta Facelift BS6 too but Toyota is not gonna stop just here.

Toyota will now launch the new Fortuner Facelift and the all-new Fortuner Legender in the Indian market. Just a couple of months ago, the company unveiled these full-size true 4x4 SUV's in Thailand and now they are finally coming to our shores. The Fortuner is a very popular full-size SUV in India. It was first launched in India in the year 2009 and in just no time, it became synonymous with the rich and the powerful. The second-gen Fortuner was launched in India in the year 2016 and it became even more popular among the Indians. Now, it will be getting the mid-life update in India and also the company will launch the new top of the line variant of the SUV called the Fortuner Legender. As you can see in these spy images, it looks really dope!

The Fortuner Legender is basically a more enhanced and sporty version of the SUV. It will get a host of cosmetic updates when compared to the regular Fortuner and also some additional features. For starters, the new Legender variant will get a unique split-grille set-up and an aggressive front bumper. It will also get dual-projector LED headlights with stylish daytime-running LEDs and sequential LED turn indicators. The Fortuner Legender will also get all-new colour schemes, black-out treatments and it will run on stylish-looking 20-inch dual-tone diamond-cut alloy wheels. In comparison, the regular upcoming Fortuner Facelift will run on 18-inch alloy wheels. On the inside, it will get an all-new 9.0-inch touchscreen infotainment system with Android Auto and Apple CarPlay connectivity, a 360-degree parking camera, ambient lighting, wireless charger, a 9-speaker JBL audio system, etc.

Finally, talking about the launch timeline, so the new 2021 Toyota Fortuner Facelift and the Fortuner Legender are expected to be launched in India in the first quarter of 2021. Currently, the BS6-compliant Toyota Fortuner is priced between Rs. 28.66 lakhs - Rs. 34.43 lakhs, Ex-showroom Delhi. The upcoming facelifted model will charge a slight premium compared to the current model. But, the Legender variant will be priced quite higher and it is expected to be priced around Rs. 43 lakhs, Ex-showroom Delhi. What are your thoughts on the spied images of the 2021 Toyota Fortuner Legender? Feel free to share with us in the comments section below. You can also join our 91Wheels Auto Enthusiast Telegram group (click via mobile to join) curated exclusively for the fans, enthusiasts and the owners. Further, subscribe to our YouTube channel for more such amazing motoring updates.