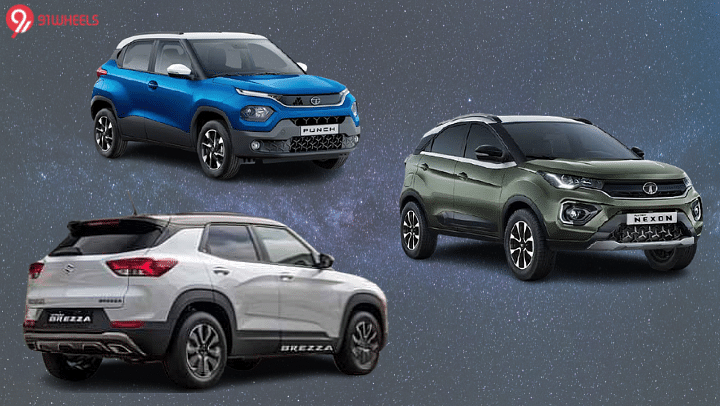 With the beginning of 2022, the automotive industry is further planning to enhance its line-up with CNG variants. Maruti Suzuki and Tata Motors are planning to add CNG variants to their cars line-up. This article will talk about the upcoming CNG SUVs in India that are expected to hit the markets in 2022.

The upcoming SUV is expected to come in a completely new avatar and will now be named Brezza. The overall silhouette will remain the same whereas the front and rear profile of the SUV has been updated with newly designed elements. No official statements are revealed about the upcoming Brezza however it is also expected to sport an updated interior with a sunroof, bigger infotainment system, wireless connected smart features, and paddle shifters.

The SUV will be powered by the same 1.5-litre K15B petrol engine that is capable of churning out 105bhp of maximum power and 138 Nm of peak torque. With CNG variants, the number might drop a bit. Upcoming Brezza CNG will be a fuel-efficient one that is expected to be around 26.08 km/kg. The upcoming SUV is expected to be launched between Rs 7 lakhs to Rs 11 lakhs (ex-showroom).

Also Read - Tata Tigor CNG Vs Maruti Dzire CNG - Here Is What We Can Expect!

Tata Punch was recently introduced in the market and the compact SUV has received an overwhelming response. It is one of the safest cars in its segment that has received a 5-Star rating in the Global NCAP crash test. Tata Motors is now one of the leading automotive manufacturers in the country.

That said, Tata launched the Tiago CNG and Tigor CNG and the company is planning to further upgrade its existing models with CNG variants. The existing model of Tata Punch is available with a 1.2-litre Revotron petrol engine that is used in Altroz, Tiago, and Tigor. Tata is planning to further bring a CNG variant of the car. It is expected to be launched by mid-2022.

Tata Punch CNG is expected to come with the same engine whereas the power and torque figures will vary a bit as these engines are not as powerful as conventional petrol. Punch CNG is expected to churn out 75PS of maximum power and 95 Nm of peak torque. There are no official statements from the company about the launch of this variant, however, if launched it will be the cheapest and the first CNG SUV in the market. Tata Punch CNG will only be available with a manual gearbox only and is expected to be Rs 80,000 to Rs 1,00,000 costlier than the existing one and might be launched around Rs 6.5 lakhs (ex-showroom).

There is a possibility that Tata Motors might further upgrade its variants with CNG SUVs. There are no official statements about the launch of the Nexon CNG whereas it is expected to be launched by the end of this year. Tata will install a CNG kit with the existing petrol engine and the power and torque figures will vary a bit as CNG variants are less powerful than the petrol/diesel variants. Prices of the upcoming Tata Nexon CNG is expected to be around Rs 40,000  Rs 50,000 costlier than the petrol one.

So whats your thought on the Upcoming CNG SUVs for India in 2022? Let us know in the comment section below. Join our 91Wheels Telegram and 91Wheels WhatsApp group to know more about vehicles, conduct discussions on your favourite ride and much more! Also, you can subscribe to our YouTube channel for video content on the latest from the world of cars and motorcycles.