Tata Altroz Turbo vs Hyundai i20 - You Should Pick What? Spec Comparo 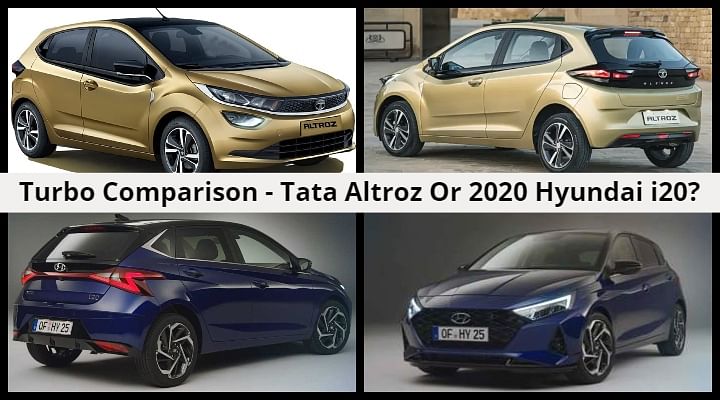 Update January 14 2021 - Tata has unveiled the Altroz and it distinguishes itself with the powerful three-cylinder 1.2L motor which makes 110 PS with 140 Nm of peak torque. Also, it gets features like Xpress cooling, new XZ+ variant, iRA (intelligent real-time assist), leatherette seats, driving modes like city and sport and among other several features.

India is a growing market and the latest trend apart from the huge rush in the SUV segment, it is the turbo petrol engine. To give the buyer performance as well as keep the mileage good, this is what every carmaker is focusing on right now. We pitch the popular hatchbacks that are Tata Altroz Turbo vs 2020 Hyundai i20 and bring you a spec comparison of both.

Before we go any further and explain to you everything we know about the Tata Altroz Turbo vs 2020 Hyundai i20, make sure you are a member of our exclusive 91Wheels Whatsapp group where we share about the latest updates from Indian Automotive Industry.

Even though the i20 gets a smaller displacement engine, it makes sure to deliver more power and torque through it. The 1.0-litre turbocharged engine which was first seen in the Venue and has carried forward to several cars like Aura, Grand i10 Nios turbo and Verna.

This engine generates 118 bhp with a peak torque of 172 Nm. Hyundai has brought in the new iMT technology for the i20 instead of the regular 6-speed stick shift with a clutch. For automatic, it continued with the 7-speed DCT gearbox and it is a good unit delivering good fuel economy. We have tested the same for Venue and we are sure for i20, the mileage will be more.

Sharing light on the Tata Altroz then it gets a 1.2-litre turbocharged engine sourced from Nexon. It is a downsized in terms of power delivery and torque figures and now generates 109 bhp with 140 Nm of peak torque. This engine gets mated to a 5-speed unit than the 6-speed we have seen in the Nexon.

Now, where the Altroz excels is in terms of weight as it weighs only 980 kgs. Yes, talk about power to weight ratio now. It will be quick and we just expect the gear shifts will not be a hassle and there is good low-end torque to whistle past the new i20.

Both the cars will also target the decade-old Volkswagen Polo 1.0L TSI which is quite a competition. Polo has always been a hot hatch in terms of the driveability and engine performance and with its 6-speed manual and 6-speed torque converter gearbox, we believe it will be quite a competition in hot hatches. Volkswagen Polo gets a 1.0L turbocharged engine which makes as much as 109 bhp with 175 Nm of peak torque.